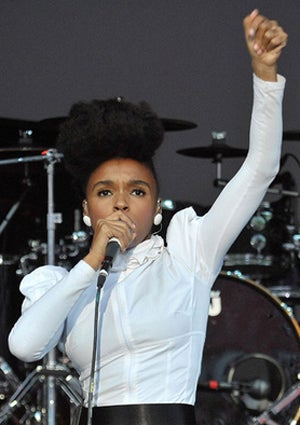 Even a near death experience couldn’t stop ESSENCE.com from catching the soul duo Janelle Monae and Erykah Badu perform at Oakland’s Paramount theater on Friday, June 18.   Like a fashionable rockstar, Janelle Monae opened for Erykah Badu in her signature black and white tuxedo and pompadour. Backed by a small band, including a guitarist with a mean straightened bob, Monae ran through songs from her recent LP, “The ArchAndroid,” released in May, along with cuts from her 2008 project, “Metropolis: The Chase Suite.” From “Locked Inside” to an acoustic version of “Smile,” it was clear that in addition to an adorable style and an extremely high energy performance — she threw out her pompadour twice — Monae possesses an enviable set of pipes. Closing out her show with her hit “Tightrope,” the petite songstress, donning a velvet cape, jumped off the stage and ran through the audience, who was already dancing in the aisles.   Badu followed Monae with a contrastingly mellow performance.   “Sistas, how ya’ll feel? Brothas, y’all alright?” asked Ms. Badu, sporting a t-shirt, sweatpants, black top hat and a patterned shawl with black stilettos.   Beginning her set by playing her video “Jump in the Air (Stay There),” which features incarcerated MC Lil Wayne, Badu herself opened the show with a medley of “20 Feet Tall” and “Out My Mind, Just in Time.” Fans raised lighters in the crowd and swayed to the downbeat rhythms, as Badu flipped her now auburn hair over her shoulders and sang tracks like “The Healer” and her self-proclaimed personal favorite “Didn’t Cha Know.”   After touring for more than ten years, Ms. Badu has really sharpened her talent for remixing songs live and her turn in Oakland was no different. Playing “Appletree” over Afrika Bambaatta’s “Planet Rock” and “I Want You” to Roger and Zapp’s “More Bounce to the Ounce,” she even rapped a few verses of Slick Rick and Ice Cube for her West Coast audience before celebrating another soul sister’s return.   “Y’all heard that Lauryn Hill is gonna be on Rock The Bells?” Ms. Badu asked the crowd. “Say Lauryn, we love you! Lala we need you.”   At this point, a near fight broke out during the “Fall in Love (Your Funeral)” — so appropriate — and after quite a bit of chest bumping, three men walked solemnly out of the theater. Since that usually means they’re ‘going to get something’ we crossed our fingers and hoped to survive until “Window Seat.”   Thankfully, we did and were even treated to Badu’s “Liberation” verse and chorus from Outkast’s “Aquemini” album. Ending her set with the song that made downtown Dallas and purple sweatshirts infamous again, Ms. Badu remained clothed and no one was hurt.