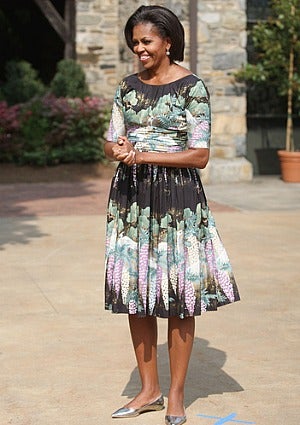 We already know that Michelle Obama is a style icon. Now we can place a value on just how fierce her fashion choices are. In Harvard’s latest “Business Review,” analyst David Yermack placed a cool $2.7 billion value on the outfits that FLOTUS chooses to wear for public appearances. Let’s break it down. According to NYMag.com, whenever the First Lady wears something for a public appearance, that company’s stock shoots upward. If that particular label doesn’t see a profit spike, then the stores that carry the label do. Yermack, a finance professor at New York University, counted that Mrs. Obama made 189 appearances, wearing clothing by or sold at 29 publicly traded companies, like J.Crew, GAP, Dillard’s and DSW. The total amount that companies benefitted from those appearances was $2.7 billion. Moreover, Yermack estimates that a single public appearance rakes in $14 million. And what happens when Michelle Obama doesn’t wear your duds? Yermack looked at 27 competitors not worn by the First Lady and found that their value decreased by 0.4. Yermack hinted that Obama is the only First Lady making such a huge impact. How fierce is that?