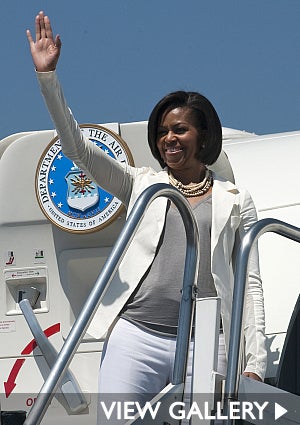 Since moving in to the White House, Michelle Obama had already visited nine countries with her husband. When she traveled to Mexico last week, however, it marked her solo debut on the world stage as the First Lady of the United States. Yet Mrs. Obama’s travels were not as straightforward as anticipated–she visited three different cities in three countries during the week, with a different message for each community. Before flying to Mexico City, the First Lady made a surprise trip to Port-au-Prince, Haiti. In the area ravaged in January by a major earthquake, she and Dr. Jill Biden met with families living in tent cities, children participating in an art therapy program, and both American and international relief workers. The humanitarian mission was to underscore the United States’ support for the Haitian people, thank workers for their efforts to help Haiti recover and rebuild, and keep the light on continuing needs in the country. While in Mexico City, Mrs. Obama visited students to extend what’s become a recurring theme for her–youth empowerment and self-determination. Reflecting on her own modest background, she emphasized hard work and discipline, but also the importance of giving back to those behind you. “I hope you’ll think about the young people two centuries ago who risked everything they had for Mexico’s independence,” she told an audience at a university. “I hope you’ll think about the young people in America who fought to ensure that all citizens, no matter their gender or the color of their skin, were treated equally under the law. You and I, we’re here today because of them.” After departing Mexico, the First Lady traveled to San Diego for an event around her signature policy issue of childhood obesity. After touring the New Roots Community Farm in a low-income area of the city, she heralded their model of providing fresh produce and safe parks in their neighborhood. “This is what we need to be doing in communities all across the country. And the truth is the world is watching these efforts,” said Mrs. Obama, hinting at the movement she hopes to spark through her “Let’s Move!” campaign to end childhood obesity. “We’re not alone in these struggles. This is happening.” Related stories: