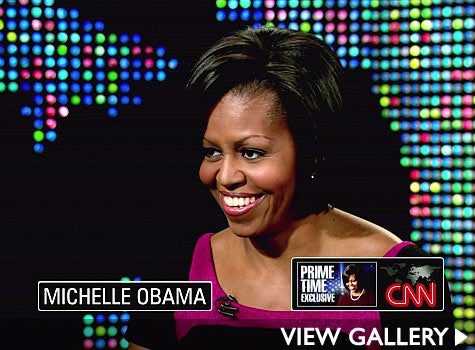 Michelle Obama appeared on CNN‘s Larry King Live last night to talk about, among other things, “Let’s Move” a White House campaign to combat childhood obesity in America. She explained to King how she made small changes in her own home to help improve the health of her family. “I went home and it was kind of a wake-up-call and we made some changes even with busy schedules. …It was portion sizes, it was a few more cooked meals. We had no absolutes, except no desserts during the week. [We] took sugary drinks out of the lunch boxes and put in water,” Michelle Obama said. She emphasized that the initiative to reduce or eliminate the childhood obesity rate is not about appearance. “It’s not a physical issue it’s really about the quality of life of our kids,” the first lady told Larry King. When asked about Sarah Palin, who has openly criticized Barack Obama, Michelle Obama said she couldn’t comment on the former governor of Alaska because she doesn’t know her. She defended her husband saying, “Democracy is about critique and the President is not immune to criticism. I think he’s doing a phenomenal job. We have to think of where we were when he took office. We were on the brink of a depression worse than any one really ever imagined and I don’t think the country ever really knew how bad things were and because of some … smart strategic thinking we’re not even talking about that.” Michelle Obama also chatted with King about what “irks” her husband. “…The challenges that he faces or has faced over this year are not what irk him,” the first lady told King last night. “It’s really, you know, our inability to solve basic fundamental problems facing the American people–improving the jobless rate, getting people back to work, ensuring that our kids are getting the absolute best education in the world that prepares them for the future, that we have healthcare, that we’re really pushing to fix our environment so that we have a…a world to live in. …When he doesn’t get those problems solved, that’s what irks him.” Read More: