Poor Michelle Obama. She can’t even blink the wrong way without the lightning fast flash of a camera catching her every expression and turning it into the next big invisible controversy. By now you’ve probably seen the pictures (and memes) of FLOTUS glancing over at President Obama while he chats with Danish prime minister Helle Thorning Schmidt at Nelson Mandela’s memorial service. In another widely circulated photo, Mrs. Obama is staring into the distance as the president, Thorning Schmidt and British Prime Minister David Cameron take a selfie.

Moments after the photos were released #MichelleObama was trending on Twitter with everyone from news sites to armchair pundits labeling the First Lady as “furious,” “upset” and “pissed.” There she was being branded as the angry Black woman again. Gotcha Michelle Obama! The truth is, we have no way of knowing what the First Lady was thinking at that particular moment or whether those photos were snapped during a brief second before or after a smile. Maybe, just maybe, she was feeling slightly somber and reflecting at the loss of a “giant of history who moved a nation towards justice.” 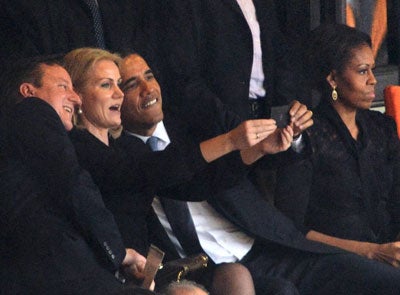 This was not a moment to feed our voracious appetites for the “Michelle Obama don’t take no mess when it comes to her man” memes that frequently flood the Internet. Or fall for the idea that she polices her husband’s every move, ever careful to catch him flirting with women (particularly White women) and always setting him straight.  In other news stories that never should have been stories, the Danish prime minister is described as “attractive” and “tall” and “blonde” and “pretty” while Mrs. Obama is “stern” and “disapproving.” As Roxane Gay points out in Salon, just a few feet away, another photo was taken of Laura Bush looking uninterested while her husband George Bush speaks to the Queen of Jordan, Rania Al Abdullah. Did that make front-page news? No.

“The response to these latest images of Michelle Obama speaks volumes about the expectations placed on Black women in the public eye and how a Black women’s default emotional state is perceived as angry,” writes Gay.

“The Black woman is ever at the ready to aggressively defend her territory. She is making her disapproval known. She never gets to simply be.”

In a blog post Roberto Schmidt, the AFP photographer responsible for the now infamous shot, writes that just a few seconds before “selfie-gate” erupted, Mrs. Obama had been “joking with those around her.”

“Photos can lie,” he added. “Her stern look was captured by chance.”

The bigger issue here is not the state of Mrs. Obama’s marriage or her facial expressions, it’s not allowing Black women the agency to decide how to present ourselves in public, or private. Then again, perhaps the First Lady should have known that a Black woman must never allow herself to not smile in public. Not even for a millisecond. Otherwise, we are you know what. #ABW