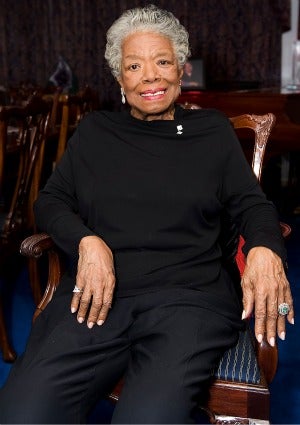 President Obama is gearing up to announce this year’s recipients of the Presidential Medal of Freedom, the nation’s highest civilian honor. Although the full list hasn’t been released, a White House source tells ESSENCE exclusively that two of the honorees — selected for their contributions to the United States’ national interests, world peace or culture — are notable African-Americans. ESSENCE honored Maya Angelou this year for our 40th anniversary “Fierce and Fabulous” Awards, and now the multi-talented author, poet, activist, actress, dancer and educator will also be recognized with the Medal of Freedom.
Angelou, currently the Reynolds Professor of American Studies at Wake Forest University, is no stranger to the White House — she’s served on two presidential committees, and delivered her poem “On the Pulse of Morning” at the 1993 inauguration of Bill Clinton. Another honoree will be Congressman John Lewis. While Lewis has served as a U.S. Representative for Georgia since 1987, he is renowned as a giant of the Civil Rights movement. Lewis was chairman of the Student Nonviolent Coordinating Committee (SNCC), helped organize the first lunch counter sit-in in 1959 at the age of 19, and participated in the initial Freedom Ride. In 1965, he also led the Selma-to-Montgomery march to petition for voting rights, where marchers were brutally confronted in an incident that became known as “Bloody Sunday.”
For his legacy of standing up for civil rights in the face of seemingly impossible odds, he will receive the Medal of Freedom. Phenomenal picks, Mr. President!