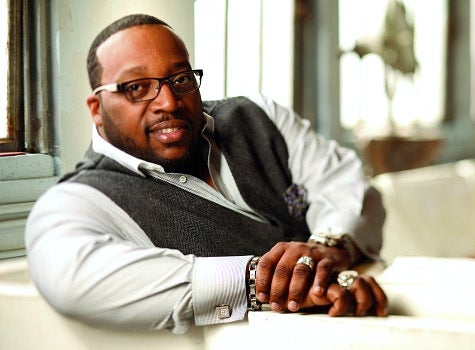 Though it may seem hard to believe, if you tally up his hit albums and singles, you’ll realize that Marvin Sapp has been doing his thing for 20 years now. Sometimes, even he’s surprised by that number. “Every day, I think to myself, ‘Oh, wow,'” he says, thankfully, about his gospel music legacy. Today, Sapp continues on his creative journey with the release of his eighth solo album, entitled “Here I Am.” Led by the overwhelming success of his first single, “The Best in Me,” which he debuted on BET’s “Celebration of Gospel” in January, he is poised to take the charts by storm once again. His fans have surely taken notice. In fact, many of them took to Twitter to spread the word. Marvin Sapp rang ESSENCE.com during a promotional stop in Louisiana to discuss his latest project, the joy of doing what he’s been called to do and the oh-so-sweet story of where he met his wife, MaLinda. ESSENCE.COM: First, congratulations on the success of your first single, “The Best in Me.” Were you surprised by how well it was received? MARVIN SAPP: Unbelievably surprised! “Never Would Have Made It” was a big song for the last three years, as was my last album, “Thirsty.” There’s always some fear whenever you release something new onto the airwaves after that kind of success, so yes, I was absolutely, pleasantly, surprised. ESSENCE.COM:Word is that you were also a huge trending topic on Twitter after your performance on BET’s “Celebration of Gospel” in January. SAPP: That’s what they tell me! [laughs] It really blows my mind that people around the country were Twittering about me and my music. I’m just a hometown boy from Grand Rapids, Michigan–where I still live–who is trying do what he feels that he’s been called to do. ESSENCE.COM: After recording with Commissioned, you are now on to your eighth solo album with “Here I Am.” Who do you believe is the Marvin Sapp fan? SAPP: When I started making music 20 years ago, I believed that my fans were between the ages of 15 and 35. I thought my fans, today, were 35 to 55, but I see that there are 10-year-old kids as well as mothers and grandmothers who enjoy the music. There are also deacons and thugs on the street.   Sometimes I still wonder what my fans look like, but if I had to describe them, I’d say that they are everyday people with everyday needs who need a supernatural message to help them though their natural walk. ESSENCE.COM: From the outside looking in, it seems that you’ve enjoyed an incredible amount of success–as a Pastor, a group member, a solo artist, a husband and a father. How do you define success today? SAPP: Success is difficult to define. I’m happy with all that I’ve done, but that makes me realize that I can do so much more. I’m forever striving to do different things and make inroads in different places. A friend of mine said something powerful at his grandfather’s funeral. He said that the greatest lesson from his grandfather’s life was that he died empty, because he accomplished everything he wanted, with no regrets. I think that, along with leaving a legacy, would be the greatest sign of success. ESSENCE.COM: Speaking of legacy, you’re the father of three and have been married for 18 years. That’s quite a legacy. SAPP: Yes, and believe it or not, I met my wife in the third grade. We’ve known each other since we were 10 years old. ESSENCE.COM: OK, it sounds like I might need to take a look back at some of my old yearbooks! What are your hopes for “Here I Am?” SAPP: I tell people that the new album is just like “Thirsty,” but on steroids. I’m just hoping that the same listening audience that embraced me on the first, few projects will embrace “Here I Am” as well. Read more: