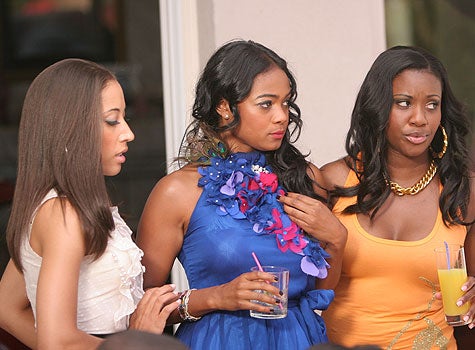 We all remember her as the cute cousin, Ashley Banks, on the 1990s sitcom The Fresh Prince of Bel-Air. Today, the Harvard grad is flexing her acting and producing chops in the digital world with the new online series Buppies, which premiered on bet.com last night. We recently caught up with the enterprising starlet to get the scoop.

ESSENCE.com: So, you are executive producing and starring in Buppies. How did the idea come about?
TATYANA ALI: Actually my sister and I started our production company Hazrah Entertainment about two years ago looking for projects that we could sink our teeth into and show what we could do as producers. The edict of our company is to bring avant-garde urban entertainment to people. So we decided to do a web series. With the web we could have the autonomy we were looking for. The Buppies story was presented to us years ago by a former classmate. We hit up some networks that passed on it as it was–as a story of five black friends in Hollywood. They wanted to change it. So we got together and financed it ourselves and decided to make it the way we saw it as a web series. We shot it over two and a half months without even knowing where it would go. BET was the network that stepped up to the plate and said, this is our market. They are completely on board. Cover Girl also sponsors it. They thought it was a good look. And it’s funny the three girl characters are all different hues, you know like the old Fashion Fair commercials. My sister and I always laughed about that and thought it would be perfect for some kind of cosmetics company.

ESSENCE.com: How did you go about casting? Did you always plan to be on the show?
ALI: The writer wrote my character, Quinci with me in mind. It’s one of those well-rounded characters that you just wait for. So I definitely wanted to play her. The entire cast is amazing. I’m just so excited for people to be introduced to these actors. They’ve had other supporting parts, but these are their first starring roles. We had the best in the business come and read for us. I was surprised. I would be running in the canyon and people would come up to me saying, oh I heard you’re casting for this web series and I want to audition. It’s because the characters are so interesting.

ESSENCE.com: What was the whole creation process like?
ALI: Buppies is our very first project; this is our baby. We worked so hard on it. And it was a family affair–I mean my parents did the craft services, my younger sister helped. I loved being behind the scenes and getting the right people involved. I loved the whole process of getting it done in a sustainable way. It was so much fun. It’s my first producing effort and I had an intuitive sense of what we needed. I definitely see doing more.

ESSENCE.com: At its core, the show is really about friendships. Do you have many go-to friends or a close-knit group?
ALI: My group is really close-knit and kinda small–in a good way. They are all really successful but we’re all in different fields.

ESSENCE.com: Is any of the relationship drama on the show based on real life experience?
ALI: One of our main characters confronts his sexuality, which is a heavy topic. And my character lost her father and right around the same time she was dumped by her NBA baller boyfriend. She’s a socialite and had a very public engagement and dumping. So I’m glad to say it is not based on me.

ESSENCE.com: Speaking of, you’ve been able to keep your romances out of the spotlight. How do you do that?
ALI: I’m kind of a homebody. I like to go out and I do go to events every now and then. But I’m not out that much and when I do go out it’s with my group of friends. We keep it small. We’re up in the cut but not trying to make a scene with bodyguards and all of that.

ESSENCE.com: Are you seeing anyone right now?
ALI: I am. And I’ll leave it at that. [laughs]

ESSENCE.com: Is he in the business?
ALI: Yes.

ESSENCE.com: Okay, we will leave it at that. We won’t blow your cover. Back to business. I read that Will Smith helped to steer you to BET for Buppies. Did you ever think that he would blow up the way he did from Fresh Prince of Bel-Air?
ALI: Oh yes! He has this incredible energy and he works so hard. It’s nothing secret about it. He works really hard and he’s just easy to be around.

ESSENCE.com: Do you stay in touch with the rest of your “Banks” family?
ALI: Yes. We really liked each other.

ESSENCE.com: Would you ever do a reunion?
ALI: That would be so much fun. We kinda had one years ago when we presented at an awards show. That was great and the people loved it.

ESSENCE.com: Well, Mr. Smith’s work ethic must have rubbed off on you. Like him, you straddle the acting and music worlds. What’s next for you on the singing front?
ALI: I’m working on an album now called “The Light.” I’m working with producer Johnny J. He worked with Tupac. He actually passed away while we were working on the album. It was really difficult to move on. He was my teacher. I was the last artist he worked with. I wrote the album myself. When he worked with Tupac, they never stopped recording. That’s why Tupac had all of this music after he died. When they talk about of the unreleased Tupac songs, they are talking about him. He wanted us to work the same way. He said we would keep making music and have a vault.

ESSENCE.com: So what are you listening to on the radio these days?
ALI: I’m a perpetual Jill Scott fan. I’m her biggest fan! I listen to Beyonce’s album and I just downloaded Shakira’s She Wolf. Oh and I love Amel Larrieux.

ESSENCE.com: Okay, the beauty editor in me has to ask about your skin. It’s flawless. What do you use?
ALI: My mom always says less is more, so I keep it really simple. I wash it and use creamy moisturizers with SPF. I try not to wear makeup every day. Kiehl’s has an awesome tinted moisturizer. It gives just enough color to even out your complexion and it’s really light.

ESSENCE.com: You’ve made so many professional transitions: from child to adult actor; from actor to singer; from Harvard to Hollywood. So many others fail. What’s the secret to your success?
ALI: I think a lot of it has to do with my sign. I’m an Aquarian and I just go with the flow and try to look at everything as an opportunity. I have had such extraordinary success in my work life. I do look at it as just that, my work life. That helps. Especially as a child actor, it’s hard to separate who you are from what you do. But it helps to keep it separate.

ESSENCE.com: So your mom is from Panama and your dad is from Trinidad. Would you say your upbringing had any affect on your success?
ALI: My parents believe that it is important for their kids to make contributions to the community around them. I try to do that as my work as an actor. The cool thing about them was even when I was doing Fresh Prince and I wanted to be a teenager and hang out, they just were not having it! It was not going down like that.

ESSENCE.com: You were giving back by volunteering for President Obama’s campaign. And you recently visited the White House. Was that a surreal experience?
ALI: It was amazing. Michelle Obama got up to speak and she really shows that it’s important for people to speak their minds, but also just as important to have ears open and to listen. And it’s not just about speaking but being heard. The whole idea of the White House being our house. People were crying. My sister and I were walking around and you could feel the impact. Being in that White House and knowing those little black girls are there with two strong parents. You feel it in your heart.
Loading the player...