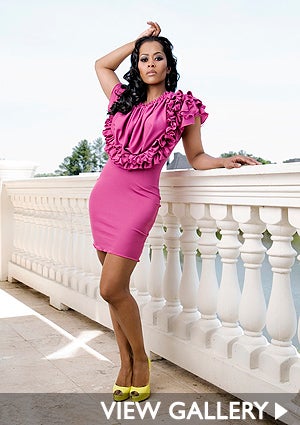 As the second season of “The Real Housewives of Atlanta” comes to an end, ESSENCE.com caught up with Lisa Wu Hartwell to check in on her, Ed and any drama that may not have aired on TV.

ESSENCE.COM: Wu-Wu how are you?
LISA WU HARTWELL: “I’m sad. The last episode comes on tonight.”

ESSENCE.COM: Yeah, it been a good season. What can we expect to see on the reunion show tonight?
WU HARTWELL: (Laughs) “There is a little tete-a-tete tonight with someone. But I can’t tell you, you have to watch it.

ESSENCE.COM: What is going on with you and Ed?
WU HARTWELL: “Ahhhhhh…(laughs)…Well, I’m not pregnant. Of course we’re still having fun trying. I think when you take the stress of saying ‘I’m trying’ away, that’s when you become pregnant. Half the time when you try is when you really don’t get pregnant–it takes longer. But when you stop trying, that’s when it happens. We’re just going to allow God to let it happen when it suppose to happen.”

ESSENCE.COM: You and Ed have such a great relationship.
WU HARTWELL: “Ed is a great support system. He takes great care of me. He sees when I’m like…[and says] ‘Okay, you need to go lay down.’ He knows when he needs to do what he needs to do. It’s about having a great partner. It’s not just about you.”

ESSENCE.COM: Do you ever get into it with each other?
WU HARTWELL: “As much as we get along, we have different views. I think that’s great because we still communicate. He’s say one thing and I’m like ‘Nah, nah, nah, that’s not how I see it.’ But we communicate and respect each other’s view. We’ve had arguments. I think that’s how you grow. We have disagreements, but we are very honest and communicate. I think that is essential in relationships.

ESSENCE.COM: Speaking of communication, was there any drama that was cut from the show that we missed?
WU HARTWELL: “There was more to the conversation with me and Kim, of course. That was cut down a little bit because I got really deep with her. I got really real with her and laid down the law. I was surprised that they cut that out. I’m a person that is more no nonsense, I’m not in your face and trying to intimidate you. If I get in your face, you are going to know what time it is.”

“The Real Housewives of Atlanta” Reunion airs tonight at 10:00 p.m. ET on Bravo.