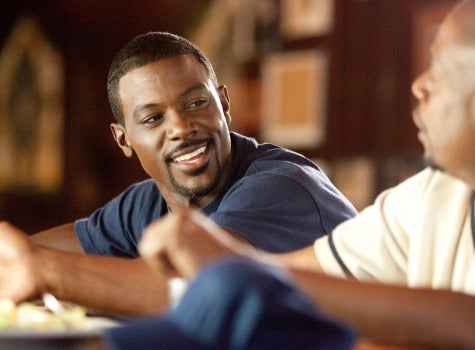 Lance Gross’ own wedding isn’t until July, but this Friday, he and America Ferrera are getting hitched on the big screen in “Our Family Wedding.” There’s one big glitch, though–their families are at each other’s throats. Thanks to an ensemble cast including Forest Whitaker, Regina King, Charlie Murphy and Carlos Mencia, the laughs, and the drama, just keep on coming. ESSENCE.com caught up with Gross, who recently won an Image Award for his work on Tyler Perry’s “House of Payne,” to chat about his new film, the impact of cultural differences and why he refuses to allow his upcoming nuptials to get too far out-of-hand. ESSENCE.COM: So, tell us about your character, Marcus Boyd? LANCE GROSS: Marcus is a very structured, respectable young man. He always has a plan for his life and now that he’s fresh out of med school, he’s going off to Laos to volunteer for Doctors Without Borders. And he’s madly in love with Lucia, portrayed by America Ferrera. ESSENCE.COM: Lucia’s grandmother literally faints when she sees Marcus. What do you think the film says about the racial tension between these two families, these two cultures? GROSS: Yes, her family is thrown for a loop when I show up! I think Lucia’s family has an idea of what they think marriage should be and the [type of] person she should bring home. As a father, it’s your little girl getting married and you just feel like she’s going to bring home that Latino male who you can get along with and have things in common. When I read the script, I didn’t see racism. I just saw it all as a misunderstanding. ESSENCE.COM: As you and your fiancee Eva are getting married this summer, did this film help you wrap your head around your own wedding plans? GROSS: Working on this film was kind of like a practice run–a crazy practice run! [laughs] Our families get along great, so I get the feeling that our wedding will run a lot smoother than the one in the movie. Besides, I’m paying for it, so we can do whatever we want. ESSENCE.COM: So, no goats? GROSS: No goats…not at all! [laughs] Read more: