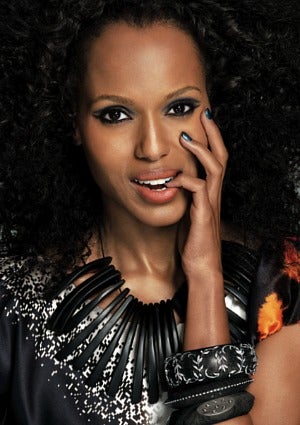 Kerry Washington is feeding the animals. The Bronx-born uptown girl is at her borough’s famous zoo standing on a high platform, clutching a leafy branch that she uses to feed Abigail, a two-year-old giraffe. While the animal carefully wraps her long, rough tongue around the leaves, Kerry asks the tour guide, “Um, can we talk about Abby’s eyelashes?” Kerry is serious. “Why are they so long?” she asks. “To protect their eyes from…?” “Branches,” the guide says, explaining that giraffes feed off the thorny acacia tree. “So,” Kerry, a L’Oral spokesperson, continues, “you’re saying if I beat myself with a twig, my lashes will get stronger?” This might be the perfect Kerry Washington moment: her childhood haunt, her love for environmentalism, her almost unexpected humor and her intense curiosity all in one animal kingdom moment. The 33-year-old actress recently moved back to New York City from Los Angeles after completing a six-month Broadway run in “Race.” She is also appearing in two new movies: the Black Panther opus “Night Catches Us” and the stellar ensemble “For Colored Girls,” in theaters November 5. Regardless of race, Kerry has managed to stay relevant, and even sexy, in Hollywood. Her roles enviably range from indie to blockbuster, from a 15-year-old Latina in her first film, “Our Song,” to a drug-addicted male-to-female transsexual in “Life Is Hot in Cracktown” to a sleek assassin in “Mr. & Mrs. Smith.” In 2007 she co-directed and appeared in rapper and actor Common’s edgy video for “I Want You.” (“He called and said, ‘Hey, do you want to be the new girl in the video?’ and I was like, ‘Yeah, if I can direct it.’ Sometimes I open my mouth and get myself in trouble like that.”) The truth is, you never know where Kerry is going to turn up next. Case in point: After graduating from George Washington University, she went to live in India to study kathakali, a stylized form of drama that interprets classical Hindu literature through dance and mime. Says Kerry, “I wanted to go someplace where theater was a part of a spiritual and cultural tradition before I was just trying to book a Burger King commercial, you know?” But, zoos aside, Kerry really took a walk on the wild side this year by appearing in David Mamet’s Broadway play “Race,” in which she portrayed a legal assistant at a firm asked to defend a man accused of sexually assaulting a Black woman. “That play was like church — there was so much talking back. People really bring their baggage,” says the actress. “Race” costar David Alan Grier has one word for Kerry’s performance: fearless. “She didn’t have to do this play. She’s a movie star. I’m glad she did because every day somebody glamorous and cool came through, like Julian Bond. She classed up the joint. I kept trying to get her to tell President Obama to call me!” In “Night Catches Us,” which arrives on-demand October 29 and in theaters on December 3, Kerry plays a former Black Panther turned civil rights lawyer. Set in 1976 post-Black Power movement Philadelphia, the film reunites her with Anthony Mackie, her costar in 2004’s “She Hate Me.” “As a kid, growing up, I had friends who were children of radicals. Many people think of the Black Panthers in caricature terms, the limited images in the media, the Black fists and Afro, and big machine gun. But here was a story about human beings. The people underneath the movement.” For all this talk about race, Kerry doesn’t like to belabor the obvious: “I don’t want to ignore my Blackness. I just want to get to the point where my racial identity is simply a part of what makes me unique in the way being from the Bronx makes me unique, or being an Aquarius, or being born in 1977 and having hip-hop be a part of my heartbeat.” Yes, Kerry Washington is a colored girl; one who perhaps hasn’t considered suicide, but has gone through her share of trials (overcoming an eating disorder, moving on from a failed engagement). Though she doesn’t follow any spiritual practice in any didactic way, Kerry relies on morning prayer, journaling and meditation to keep grounded. “My head is just so filled with… stuff,” she freely admits. Is it? You’d never know it looking into that luminous heart-shaped poker face. Kerry Washington, understanding that she is only human, laughs and then says, “Because I’m a good actor.”