By Kimberly Wilson · Updated December 6, 2020
If you’ve been keeping up with Kenya Moore on Instagram, then you know she’s been twirling through her first pregnancy like the pageant star that she is. And though it may look easy, the Real Housewives of Atlanta is in final prep mode as she nears the final stages of her pregnancy. “Everything is good and healthy,” Moore told E! News as she prepares for her due date, which is around Thanksgiving. “This is the home stretch and I’m being as healthy as I possibly can and being as positive as I can.” Though Moore and her husband Marc Daly don’t know the sex of the baby yet, they’ve landed on a unisex baby name — though they’re not sharing just yet. “My cousin actually said it at a family function once. Marc and I both looked at each other and we were both like, ‘Oh my God! That’s an amazing name,'” she teased. “It means so much to us. It has great significance to us.” Though we won’t get to catch any tea from Moore on this season of RHOA, the former star has been providing a ton of pregnancy updates for her followers as her due date nears. 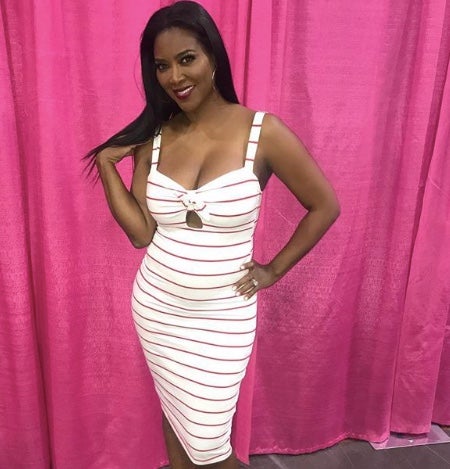 “I’m sharing as much as I can, and I do have a project up my sleeves,” she shared. “They’ll get an inside glance into as many moments as I can and whatever I chose to share with the public, they definitely see a lot that I experienced from baby shower to birth to planning stages.” Moore isn’t the only RHOA star that is pregnant. Recently, Porsha Williams also announced that she is also expecting a bundle of joy. Though, no word on if the two are sharing pregnancy secrets to one another just yet.
TOPICS:  Kenya Moore