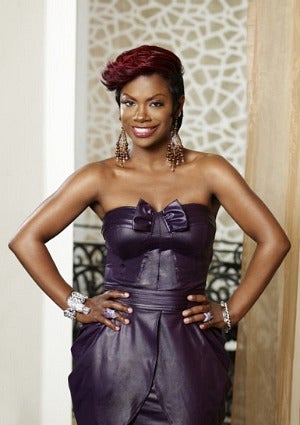 A year after her fiance AJ Jewell’s unexpected death, “Real Housewives of Atlanta’s” Kandi Burruss is still coping with the loss, and keeping busy by working on her album and dating. This week, Kandi chatted with ESSENCE.com about all things romance, staying involved with AJ’s children, and former castmate Lisa Wu Hartwell. ESSENCE.com: October marks the first anniversary of AJ’s death, how are you dealing with the loss? KANDI BURRUSS: I’m fine. Of course when I sit and think about it, it makes me sad and I don’t like to keep talking about it because that makes me emotional. I think I deal with death differently than most people. My thing is, I don’t want to sit in the house and dwell and be crying and depressed. I’d rather keep my mind off of it and block it out. You know it happened but it’s my way of coping to just keep moving. ESSENCE.com: Are you still raising his twin girls? BURRUSS: No, AJ and I had broken up before the season even aired last year. So what you saw was really five months old, but the girls were still living with me. One week prior to his passing, AJ decided they should go back to stay with their mom. He passed away one week later. That was crazy because you never know… It’s still kind of a touchy subject but I still participate in their lives. ESSENCE.com: You teared up on the “Housewives” reunion show, was it all too much? BURRUSS: They showed me break down crying because Andy Cohen kept asking me about it again and again. I knew I couldn’t really handle talking about it over and over, but as long as I’m not constantly talking about it, I’m good. ESSENCE.com: So, are you dating now? We saw you and Willis McGahee on the season premiere… BURRUSS: Yeah, I date, [but] nobody I want to talk about. To me, when it gets super serious then maybe I’ll tell people about it but I’m not super serious. I already know people have me on the blogs with Willis. I learned some news my damn self looking at the blogs. They were saying that Willis is living with a new baby’s mom and they’re making me look like a home wrecker. This is news to me, but it’s not true. I haven’t knowingly dated a married man since I was 21 and that was a moment of crazy. I soon corrected that and never again did I cross that road. I would never date a dude in a relationship; I’m too grown for that. ESSENCE.com: We hear that you went on tour with Kim Zolciak. BURRUSS: We actually did three spot dates. ESSENCE.com: How was that? BURRUSS: Girl… the shows themselves were pretty cool. We did Charlotte, North Carolina, Orlando and Miami. They were club performances, except for the Miami show which was a charity event. We took a bus from Orlando to Miami, let’s just say that the bus ride was interesting because NeNe Leakes actually met us in Orlando. And the plot thickens… ESSENCE.com: You and NeNe didn’t get along last season, what’s your relationship like now? BURRUSS: It got really bad at one point and the show reached out to us individually like ‘yo, you really need to chill out.’ They were right, we were having arguments live on-air on the radio and that had nothing to do with the show. It wasn’t getting taped, so it was getting out of hand. ESSENCE.com: What do you think of the new cast members Phaedra and Cynthia? BURRUSS: Phaedra’s really nice, she and Cynthia are almost too nice for this show. But they’re going to have their share of things to happen. ESSENCE.com: Why do you think Lisa Wu Hartwell didn’t make this season? BURRUSS: I don’t know, it was a decision made by the Bravo producers. But they didn’t give us a reason. She wasn’t taping that much. We all have our own things going on but when I had conversations with the cast members, no one was mentioning having scenes with her. Even up to the day that we took the photo with the peach in our hand. We all came that day, and we all had trailers but I didn’t see her name on one. She’s cool though, still doing her thing. For more of the “Real Housewives” drama you love, click here.