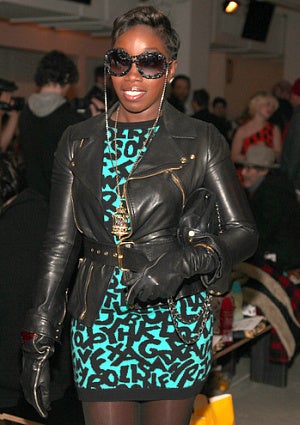 Estelle‘s sound is a unique blend of hip-hop, pop, reggae and soul–throw in her special voice and swagger, and it kills. “Freak,” the single from her new album “All of Me,” is a sign of even more hotness to come. Just check out the song’s chorus: “Every single girl should embrace their inner freaky freak / Don’t be scared, don’t be shy / Yes you gotta let it breathe.”   Honestly, I was blown away the first time I heard it…and not only by the song! The images from the video are so impressive, I asked my dear friend Alvaro, the genius illustrator, to create a sketch drawn from the look of the video. Meanwhile, I recently caught up with Estelle, herself, to chat about everything from her move to New York City to the inspiration behind her hot new look and sound. IMAN: When you moved to New York in 2007, did it inspire the sound of your new music?   ESTELLE: A little bit. I’m really more of a world music artist…I pick up a little bit of everything because I travel everywhere. My sound is always inspired by the music I listen to at whatever stage I’m at. IMAN: Everybody sees New York in their own way. How would you describe Estelle’s New York?   ESTELLE: Just like London, except twenty-four hours! Also, it really is like Jay-Z and Alicia’s song “Empire State of Mind.” You can do exactly what you want to do here. IMAN: I love the sound and the look of the new single….it’s freaky and frisky! How would you describe the sound and where did the inspiration come from?   ESTELLE: “Freak” was inspired by Jean Paul Goude, who worked with Grace Jones. It’s about celebrating eccentricities, the whole notion of “different” as beautiful. I just used everything I’ve heard or read about myself and other women, and we put it in the video. IMAN: You have a lot of confidence, and you can be raw and aggressive at times. Where would you say that comes from? ESTELLE: My belief in me! Growing up, I always had to stand up for my belief that I was acceptable even though I didn’t sound like, look like, or behave like the so-called “norm.” Everyone’s different and there’s a space for everyone, people don’t have to feel forced to fit into a category. Real life is not high school.   IMAN: You’ve collaborated with designer Rachel Roy on a limited edition jewelry line–was this something you always wanted to do, and should we expect an Estelle accessories line in the future?   ESTELLE: Yes! It was great to see a dream of mine happen…I’ve always wanted to make my own jewelry. I’m grateful for the experience with Rachel Roy and the team…simply amazing.   Check out Estelle’s performance at Macy’s on April 1st from 6-8pm, and click on www.RachelRoy.com for more info on Estelle’s limited edition jewelry collaboration.