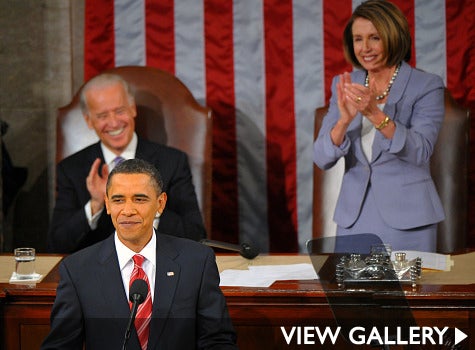 One of the most divisive elements of President Obama’s State of the Union address this week was his call for a three-year freeze on government discretionary spending starting in 2011. “Families across the country are tightening their belts and making tough decisions. The federal government should do the same,” the President said on Wednesday, pitching the freeze as a fiscally responsible move to bring down the deficit. Under the President’s plan, spending related to national security, in the Departments of Defense, State, Homeland Security and Veterans Affairs, will be exempt from the freeze. Programs like Medicare, Medicaid, food stamps and Social Security will also not be affected. But without a spending increase on other government programs to keep up with inflation, they will be taking a hit. Since that includes social programs for the poor–public housing, for example, and job training efforts–many Democrats aren’t on board. They noticeably sat on their hands during that section of the President’s speech. “I know that some in my own party will argue that we cannot address the deficit or freeze government spending when so many are still hurting,” he said, addressing those concerns on Wednesday. “I agree, which is why this freeze will not take effect until next year, when the economy is stronger. But understand–if we do not take meaningful steps to rein in our debt, it could damage our markets, increase the cost of borrowing, and jeopardize our recovery, all of which could have an even worse effect on our job growth and family incomes.” But another issue that’s been raised by folks on the left is the spending freeze will exclude the massive budgets of the Departments of Defense and Homeland Security. “Instead of freezing non-defense discretionary spending, we need to focus on bloated unnecessary Pentagon spending and cost savings for ending the wars which have already cost us over $1 Trillion,” said Congresswoman Barbara Lee in a statement, echoing the sentiment from numerous defense analysts that there is plenty of wasteful spending to be trimmed from the Defense Department without hurting the military efforts in Afghanistan and Iraq. The White House insists, however, that the Defense budget remain off limits. “Many of my colleagues and I are concerned about the impact of this freeze on jobs and the economy,” Lee continued. “At this critical time we should be doing more direct government investment to create more job opportunities.” What do you think about President Obama’s spending freeze idea? Is it wise and disciplined fiscal policy, or will it make those at the bottom bear an even larger burden? For more of Cynthia Gordy’s Obama Watch, click here. Read More: