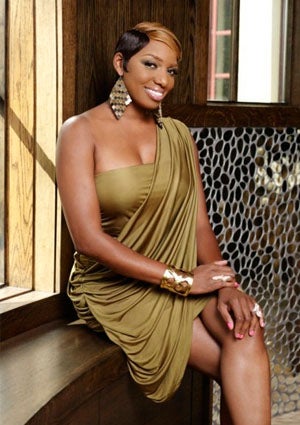 What would “Real Housewives of Atlanta” be without Nene Leakes? — the word “bland” comes to mind. Nene stopped by ESSENCE.com to talk about her marriage to Gregg, why she’s not wearing her wedding ring, her ongoing feud with Kim Zolciak and the truth behind cheating rumors. You know she sets the record straight! ESSENCE.com: At the end of last season, you and Kim had another major falling out. Are you making up this season? LEAKES: Ummm… Let me think about that for a moment. I think when the show first opens, obviously, you’ll see me and Kim trying to mend fences. Today, I would just say we’re OK, because you know we’ll never be BFFs. We’re just cool and fun, have cocktails, and a good laugh. I love it. ESSENCE.com: Last season you were on the search for your biological father. Will we see you pick that up this season? LEAKES: I did not find my biological father. We didn’t do a DNA test. I know so many people think he’s my biological father — after meeting him that time, I never met him again. ESSENCE.com: So you’re not going to pursue it this season? LEAKES: No. It’s very draining emotionally and I had so many other things going on in my personal life that I didn’t even have time to fit “who’s your daddy” in a this point. I feel like I’ve gotten all the answers I need at this point. I’m just fine with it, I really am. Then the person who’s been my dad all of my life, I don’t want to hurt him any further. It really hurt him to know he’s not my biological father. And I don’t want to do that anymore. ESSENCE.com: In the season three promos we see that Gregg did some “business deals,” what happened? LEAKES: Now really, do you think I can tell you that?! You’ll have to watch the show. Now, there are some things that Gregg and I both go through in our relationship. You guys have never seen us have any personal issues on the show. So this season you’ll see some things happen between Gregg and I. It’ll be interesting. I can’t tell you everything that happens. I think people will be able to relate to what we’re going through, because we’ve been together for 14 years. ESSENCE.com: Are you going to do counseling this season? LEAKES: I do see a therapist once, by myself. ESSENCE.com: Any couple’s therapy? LEAKES: Not on the show. ESSENCE.com: You were also seen without your wedding ring, does that stand for anything in particular about your relationship with Gregg? LEAKES: I’m without it today. My wedding ring I’ve always loved to wear. I’ve worn it for 12 years, and when we started going through changes, I took it off. He knew that my ring was very serious to me and that it meant it a lot to me, so I always wore it. So when we started going through changes, I said ‘I’m going to take it off’ because I’m really trying to open up his eyes that this ring has meant so much to me in 12 and 13 years , but I will take it off. I still haven’t put it back on yet, so obviously that means we’re going through something. ESSENCE.com: Back in the end of August you tweeted, “I’m a cheater I’m a cheater! I sleep wit men on my precious good husband! Now let’s say it together, I’M A CHEATER! Question: how you know?” Were you blowing off steam? LEAKES: I was saying that ‘I’m a cheater,’ because so many other people were saying it. Then I thought to myself, maybe if I say it, then they would shut up. For those that really know me, I’m a very loyal wife and a very loyal friend. I took it very personal that someone posted my face somewhere and called me a cheater. Even the housewives, sometimes we’re not cool, but they all know that that is not my character. So I was really pissed to see that plastered everywhere. And the real deal was, why was I a cheater? Was I in the bed with someone? Did someone see that? To be a cheater, you need to be sleeping with somebody. And this va-jayjay cost a lot to sleep with it. OK! I’m not just jumping in the bed and sleeping with folks, I’ve never been that girl. I took it so personally, it wasn’t funny. Everybody who knows me, if we are truly friends, you know I’m a loyal friend and you know I’ll do anything for you. And all the years I have been with my husband, I’ve been a loyal wife. It was so easy to put it on somebody who’s outspoken, because you think it’s more of my character. Oh baby, you got me real messed up then. I’m a lot of things, but one thing I’m not is a cheater. Then to link me to somebody, really pissed me off. We do address this on the show.   ESSENCE.com: How does your new career in entertainment reporting work out for you? LEAKES: Before, I worked for the Insider for a few weeks and I hosted the Emmys from the red carpet with Ryan Seacrest. I always knew that I liked talk panels and entertainment shows, I also like talk shows. I started to think that this would be really good for me. Before I come to a place like New York or Los Angeles, I need to practice and learn what’s behind the scenes. I decided to work at my local news station in Atlanta. Will you be tuning in tonight at 9pm on Bravo to see if she will kiss and make up with Kim? For more of the “Real Housewives” drama you love, click here.