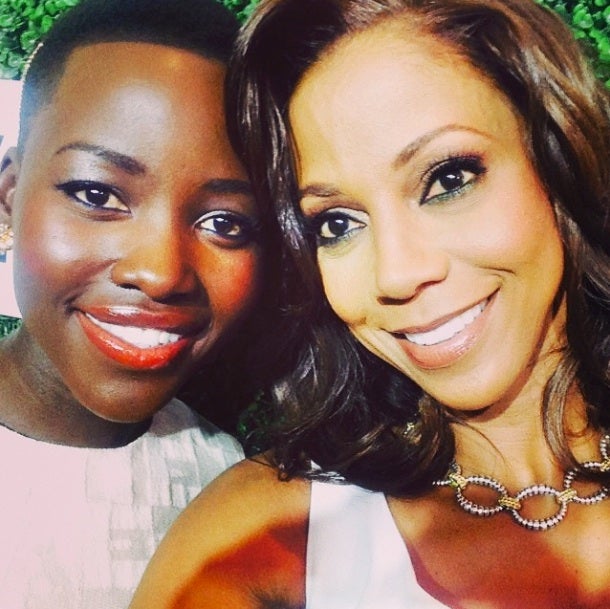 Holly Robinson Peete is many women, wrapped into one. She’s a wife, mother, daughter, sister, actress and a new author. She’s also a philanthropist and an advocate for families, like her own, who’ve been affected by autism. Her life is full, yes, but she wouldn’t have it any other way. On this, the inaugural day of National Autism Awareness Month, the busy mom of four took a break from juggling her brood’s spring break schedules to chat with ESSENCE.COM about the journey of raising an autistic child, her family’s new literary projects and why she has no qualms about flexing her muscles on this season’s “Celebrity Apprentice.” ESSENCE.COM: You’ve got four kids at home. How did you manage to fit “Celebrity Apprentice” into your life? HOLLY ROBINSON PEETE: What’s funny is that I watched the show last year and loved it, but I remember thinking, “I could never do that!” Then Mark Burnett, the executive producer, approached me after he’d attended a fundraiser for my HollyRod Foundation and said he thought I’d do a good job on the show. My first thought was, “There’s no way I can leave my kids for six weeks.” Then I thought, “I am not interested in being cast as the next Omarosa!” [laughs]
What sold me is when I learned that they were going to up the charity quotient. Anybody who knows me knows that my foundation is like my fifth child, so when they dangled that charity check, I asked my husband, Rodney, what he thought about me being away from home and he said, “I’ve got this.” The kids were OK, too, until the day I left. Then, they all melted into tears. ESSENCE.COM: You joined the show to raise funds for your foundation. What are you learning about yourself in the process? PEETE: My dad had Parkinson’s, so we started the foundation to help families dealing with the disease. When autism entered our lives [her 12-year-old son, R.J. was diagnosed at age three], we wanted to help those families, too.
What I’m learning about myself is that I have a little bit more tenacity than I thought and also, I’m a bit impatient with people who aren’t as organized as I am or don’t move as fast as I do. I’m very focused on my goal, so whenever someone steps to me with some drama, I’m like, “I didn’t come here for that. I’m here to be the voice for families affected by autism. I left my kids for this, so I need to get mine and go home before the house burns down!”   ESSENCE.COM: You’ve also co-written a children’s book, “My Brother Charlie,” with your 12-year-old daughter, Ryan. PEETE: Ryan wrote a story called “The Invisible Twin” that she read at school. It was about her experience of having a twin brother who never talked to or connected with her and then one day, he came to her aid after she hurt herself. That story was the cornerstone of our book.
We wanted children to be able to understand what autism is and to be tolerant and accepting of children with autism. Also, my hope is to help move the conversation forward into areas that we’re not talking about in the media, like how African-American kids are being diagnosed two-to-five years later than kids from other communities. That’s not OK. ESSENCE.COM: So, what was the impetus for your husband to write his book, “Not My Boy!: A Father, A Son, and One Family’s Journey with Autism?” PEETE: When we got R.J.’s diagnosis, Rodney and I took two different paths. I rolled up my sleeves and went into hyper-uber-supermom mode because I wanted to do everything I could within the short window of time [to improve] his development. Rodney went into denial. He thought he could discipline autism out of R.J., which was counterproductive to his development and to our marriage.
Rodney was an All-American, superstar athlete his whole life and I understand that he had dreams for our son – Rodney, Jr., “R.J.” – who is his namesake. He had to release all of those expectations, which was devastating for him, but there were no support groups out there for fathers. He’d always say that fathers were the ‘forgotten parent,’ so that’s why he wrote the book. It was hard for him, but I think the book will be tremendously helpful to families. I’m really proud of him. ESSENCE.COM: When you look back on your life, how do you feel about the path you’ve traveled so far? PEETE: Well, I’d always envisioned myself doing television and I was very fortunate to work on shows, back-to-back, for 15 years. Sometimes when my daughter and I are walking down the street, someone my age will stop to say that they loved me on “21 Jump Street” or “For Your Love.” Ryan will ask, “Mom, how do they know you?” and it’s like, “Girl, your momma was something in the ’90s!” [laughs]
When God hands you issues, you just have to take them on. Like Parkinson’s, when autism entered our lives, it was a bummer, but we knew that we had to do something to help ourselves, and others. That’s where the philanthropy came in. Some people know me [for my television work] and now, the younger generation recognizes me from “Celebrity Apprentice” and for my charity work.
I firmly believe that living a life of service is a dignified life…and I love that so many people know that about me. For more information about “My Brother Charlie,” “Not My Boy!” and the HollyRod Foundation, visit www.hollyrod.org. “Celebrity Apprentice” airs on Sundays at 9pm, ET, on NBC. Read more: