Despite the snowpocalypse, ESSENCE joined more than 500 N.Y.U. students and other invited guests to hear Chelsea Clinton moderate an invigorating conversation between Hillary Clinton and Melinda Gates. The intimate morning discussion didn’t focus on 2016—and a potential presidential bid by Senator Clinton, but instead on 2015, which will mark the 20th anniversary of the groundbreaking United Nations World Conference on Women in Beijing.

Yesterday’s event also announced a collaboration between The Bill, Hillary & Chelsea Foundation and the Gates Foundation for “No Ceilings: The Full Participation Project.” The partnership will employ technological resources to collect and analyze data on the global progress of women and girls and where there is still work to be done. “We have seen progress,” Clinton said. “But we’ve also seen that there’s not an adequate base of information and evidence that we can draw conclusions from about how much progress has been made and what the gaps for action and decision making are.” Clinton first announced the No Ceilings initiative on November 1, 2013 at the Pennsylvania Conference on Women.

Then, Clinton remarked: “It is time for all of us to take a clear-eyed look at how far we’ve come, but more importantly, what we need to do now for the agenda, that we do here at home and that we help others do across the world. Because after all, women and girls still comprise the majority of the world’s unhealthy, unfed, unschooled and unpaid. At least 100 countries have laws on the books that limit the participation of women in the economy. In some places, women cannot open a bank account or sign a contract. In others, they are restricted from what jobs they can hold. And even in advanced economies like our own, women earn 16 percent less than men for doing the same job.”

Now, you can do your part to empower women and girls domestically and globally. For details on #NoCeilings, visit clintonfoundation.org. 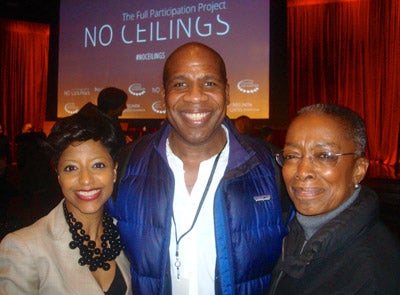