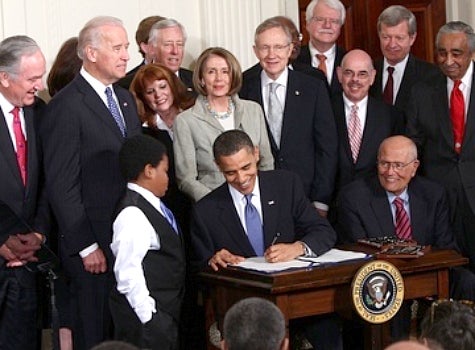 The other day I may have acted as if the House passage of health care reform on Sunday night was no big surprise. But I think, in the Democratic momentum leading up to the vote, I lost sight of the fact that it was actually pretty astonishing. Remember, when Democrats lost a Senate seat in January after the Massachusetts special election, this town rang the death knells and called it a wrap for health care reform. But President Obama signed the bill into law today. “With all the punditry, all of the lobbying, all of the game-playing that passes for governing in Washington, it’s been easy at times to doubt our ability to do such a big thing, such a complicated thing,” Obama said today at the East Room signing ceremony. Packed with what seemed to be the entire Democratic Congressional delegation, along with invited Americans who have been adversely affected by the current health care system, the room swelled with excitement. Remarks were punctuated with cheers of “Fired up! Ready to go!” I swear at one point I saw Congresswoman Gwen Moore raise the roof. When the President thanked the lawmakers for their votes, saying that they had “taken their lumps” in the debate, New York Congressman Gary Ackerman yelled out, “Yes we did!” to sustained laughter from the crowd. “But we’re still standing,” Ackerman followed up. In remarks introducing the President Obama, Vice President Joe Biden touted his leadership on the issue. “Our children and our grandchildren, they’re going to grow up knowing that a man named Barack Obama–” (and at this point a Congresswoman let out a church-style ‘Wellllllll!’)  “–put the final girder in the framework for a social network in this country to provide the single most important element of what people need. And that is access to good health.” After explaining that some of the reforms won’t be fully implemented until 2014, such as the public mandate and health insurance exchanges, President Obama rattled off some things will go into effect immediately. Among others, they include: “Today, we are affirming that essential truth–a truth every generation is called to rediscover for itself–that we are not a nation that scales back its aspirations,” Obama said. “We are a nation that faces its challenges and accepts its responsibilities. We are a nation that does what is hard. What is necessary. What is right.” And with that, he signed the historic legislation–turning what conventional wisdom said was impossible just a few months ago, into reality. For more Cynthia Gordy’s Obama Watch stories, click here. Read more: