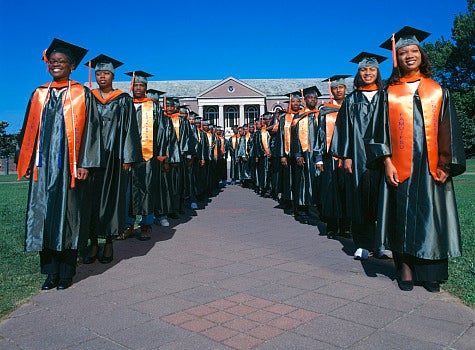 Black college presidents were none too pleased last year, when it was revealed that $85 million in extra funding that historically Black colleges and universities (HBCUs) had previously received would not be included in the 2010 federal budget. This fund, created by Congress in 2007, was a temporary, two-year program already set to expire in 2010–but many were angry that President Obama did not renew the money. Black bloggers, framing the decision as a budget cut, proclaimed that HBCUs fared better under President Bush. Perhaps in response to this disappointment, when President Obama released his 2011 budget proposals last week, it included promising news for HBCUs. As part of his $3.8 trillion budget, he has called to increase federal spending for Black colleges by $98 million. The administration has also proposed building on its 2010 budget increases to student aid, especially through Pell Grants for low-income students. Shortly before the 2011 budget was unveiled, ESSENCE.com spoke with Dr. John Silvanus Wilson Jr., director of the White House Initiative on Historically Black Colleges and Universities. In leading the office charged with increasing money from federal agencies to HBCUs, Wilson says he is on a mission to make Black colleges shine brighter than ever before. ESSENCE.com: You were previously an administrator at George Washington University and MIT–can you explain your connection to HBCUs? DR. JOHN SILVANUS WILSON JR.: Well, I attended Morehouse College, so I’m rooted there. My parents and many members of my family went to HBCUs and oriented me to the HBCU world growing up. My thinking about HBCUs has always been positive. I was enormously well served by Morehouse. There is no question that the quality of the education that I got, and the competitiveness that education gave me, was a great thing. ESSENCE.com: How does your agenda differ from those before you? DR. WILSON: Everything we’re doing now is tied to the 2020 goal that President Obama has set. By the year 2020, he wants America to have the highest proportion of college graduates in the world. So my mandate is to ensure that HBCUs play as strong a role as they can in reaching that goal, by closing the resource gap between Black colleges and the strongest in the industry of higher education. ESSENCE.com: What specifically are you doing to help meet the 2020 goal? DR. WILSON: We’re improving the relationship that the agencies have with HBCUs, and that requires improving perceptions about HBCUs. They have to know the great things going on in HBCUs that are worthy of investment, and in our relationship we have to be a partner–not a patron. Within that context, our quest for support is not about civil rights or diversity or reparations or even equal opportunity. Those are signposts of the old narrative. We are instead ensuring that HBCUs are a major reason why we reach the 2020 goal. It’s a different posture that we have. We’re not trying to appeal to conscience. We’re appealing to the national ego to be number one. Read more: