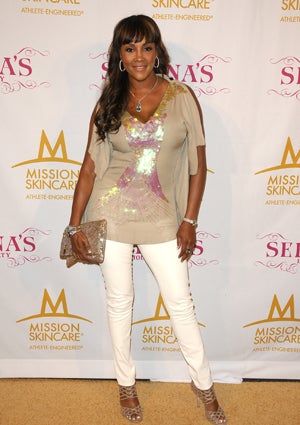 The oh-so fabulous and sexy Ms. Vivica A. Fox celebrates her 46th birthday today! Not only a dazzling beauty who’s caught everyone’s attention (including rapper 50 Cent back in 2003), Ms. Fox knows how to kick butt and take names as she did alongside Queen Latifah and Jada Pinkett Smith in the classic 1996 movie “Set It Off.”   We first saw this megastar actress in her break-out role as Jasmine Dubrow in the Oscar-winning, world-wide box office hit “Independence Day” in 1996.  Most recently, Fox took on another action-packed role in “Kill Bill Vol. 1” and “Kill Bill Vol. 2.” In 2007, Fox once again sashayed back onto our television screens when she competed on “Dancing with the Stars.”  From being chosen by VH1 as one of the “40 Hottest Hotties over 40” in 2005 to starring alongside Oscar winners and award show veterans in films that have stood the test of time, this foxy lady continues to cross generations of viewers with her illustrious star power and impressive career resume — not to mention the artillery of gorgeous men she’s dated. We wish her a Happy Birthday and continued success.  Keep doin’ your thing, Ms. Fox.