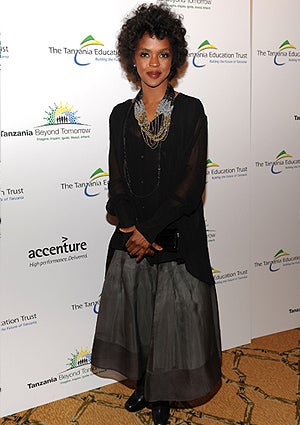 Today marks a very special day for many of us who believe that Lauryn Hill is one of the most important female rappers/songstresses of our generation: our girl turns 35 today. Lauryn Hill was immediately embraced as one of our most beloved artists since her days as one-third of the iconic group, the Fugees, that blended hip-hop, soul and R&B with Caribbean influences in the mid-90s. One of their most notable songs on the 1996 album, “The Score,” was Lauryn Hill’s cover of the Charles Fox and Norman Gimbel’s 1971 hit, “Killing Me Softly.” Although the song has been done by every artist from Frank Sinatra to Roberta Flack, it is Hill who still has fans attempting to reach the soul-wrenching notes she did, when L-Boogie took it to the bridge 14 years ago. Hill later broke from the group (rumored to be the result of failed relationship with member Wyclef Jean) to pursue a solo career in which she birthed the classic 1998 album, “The Miseducation of Lauryn Hill.” The album went on to sell more than 8 million copies in the US alone, and brought her international success and fame. While some may covet this success, the notoriety pushed Hill away into the land of incognito for four years. In 2002, she surprised fans by making an appearance on MTV’s Unplugged, then dropped a poorly reviewed album shortly after. With the exception of the 2005 BET Awards’ Fugees reunion, an incessantly bizarre concert in Brooklyn in 2007, and unconfirmed rumors swirling this week that she will be making a guest appearance at the 2010 Rock The Bells concert, fans are oblivious to what she is doing and if she will ever return. Funny thing is, I get the feeling that Hill likes it that way. As we say Happy Birthday to one of the illest females to ever do it, without a doubt — she’s truly missed. Lauryn, we don’t know why you abandoned us, but here’s 10 reasons why we want and need you back! 1. There aren’t too many artists we don’t mind our little girls looking up to. 2. Although Drake tries, no one has mastered both singing and rapping like you. 3. Rihanna may think it’s cool to be off-key, but only you know how to make a note imperfectly perfect. 4. Artists like Souljah Boy, and songs like “Say Ahh” are hits. 5. Erykah Badu can’t carry the females in the good music movement all by herself. 6. New Jersey needs better representation than the “Jersey Shore.” 7. Everywhere you turn, it’s all about pop music, and music is ruled by everyone goo-goo over Gaga. 8. Although talented in her own right, Keri Hilson can’t be the only female to sing over a rapper’s hook. 9. You make men value natural beauty. 10. The game simply isn’t the same without you! Happy Birthday!