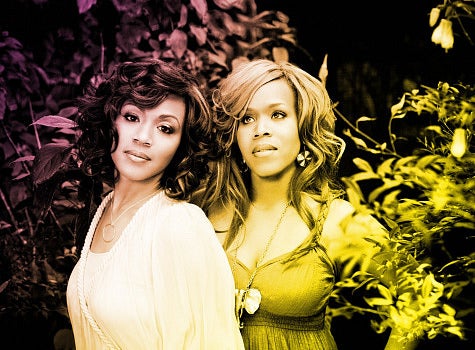 We know their songs by heart and last month, we cheered them on when they picked up a Grammy–their third–for the chart-topping single, “God in Me.” Though we’ve watched this gospel duo (who are also headliners for this year’s ESSENCE Music Festival) blossom, there’s definitely more to Mary Mary than meets the eye.  Ten years and four albums after their debut, sisters Tina and Erica have mastered the delicate art of balancing career success, marriage and motherhood…but not necessarily in that order. Along with preparing for the April release of their book, “Be U,” they’re putting the final touches on their soon-to-be-titled album which shall coincide with the Fall 2010 launch of their apparel and bath & beauty lines. Did we mention that Tina is the mother of four and Erica, a mom of one, is currently with-child? Mary Mary rang ESSENCE.com during a brief “mommy break” to talk about music, family and the joys of staying true to oneself. ESSENCE.com:  Ladies, belated congrats on the Grammy! Let’s talk about the new album, too. What can we expect to hear from you next? ERICA:  Ooooh, I’m so excited! We haven’t chosen a single, but the music we’ve recorded so far is amazing. We want to continue to reach as many people as we can. There are a lot of people who already know God and attend church, but there are others who don’t. I feel better about introducing somebody to God as opposed to giving an elder, church mother something to listen to. She already knows it, she’s got it! TINA:  But I’m not mad at her! [laughs] Somebody’s got to make music for her, but we make music for those who think that God is irrelevant until they get old or they’re broke or when someone in their family dies. Some people think that being cool or fashionable can’t be part of being Christian, but if you remain true to yourself while you’re on your quest, you’re all good. We’re creative people, so we always want to make great music. We want anybody who hears our music to think, “I like the lyrics, I like the beats and melodies.” ERICA:  Right. Then the message goes behind that and does the real work. ESSENCE.com: Well said. So, you’ve got a successful recording career, you’re winning awards and touring, yet you both have very full home lives. How do you keep it all together? ERICA:  For me, it’s about making my family feel important. I can’t be so consumed with work that I don’t give them my time. I’ve seen in my husband Warryn’s face when I need to put the Blackberry down. I’ll be candid–we did go through a period when I thought, “Oh God, I’m going to be the ‘divorced Mary.'” I had to say, “Tina, I’m going to take a break so I can get things straight at home,” and that’s what we did. TINA: Lately, it’s been a struggle for me because I’m without a nanny. ERICA:  You are so bougie! Momma had nine kids, with no nanny! [laughs] TINA:  [laughs] But Momma was at the crib and we’ve been traveling all over the world! I’ve found that you have to prioritize and do the best you can. Whatever we’re doing, we go hard. When it’s about Mary Mary, we give it our all so that when we have days off, we’re exclusive to family. Then, when it’s family time, I’m not accessible and that means no calls, no e-mails–no nothing. I give 100% to my kids and this man right here because they are my life. If they’re not happy, I’m not happy. ESSENCE.com: So, how do you define success today? TINA:  I believe that success is balancing and maximizing the opportunities that you are given. It’s about prioritizing, but also, working hard so you can give your family something to be proud of.   ERICA:  Success is knowing who you are, knowing whose you are, and knowing the difference between the two. It’s having fans whose lives are changed by your music. It’s not just the quantity of people you touch, but how you touch them. Read more: