Things are going well for Gugu Mbatha-Raw. Previously known for television stints on shows like Doctor Who and Undercovers, the actress made an impressive play for leading-lady status with the highly lauded period drama Belle earlier this year.

Now, Mbatha-Raw is set to star in writer-director Gina Prince-Bythewood’s new romantic drama Beyond the Lights, (out November 14). In it, she plays Noni Jean, an R&B pop princess who falls in love with a handsome young policeman named Kaz (Nate Parker) who saves her from taking her own life. The actress spoke with ESSENCE.com about the challenges of the gritty role, the pressures of fame, and the power of self-love.

The character you play in Beyond the Lights is almost the antithesis of the character you played in Belle. What drew you to this particular role?
That was what was really attractive to me about Beyond the Lights, after doing a period drama, something very repressed and restrained – to do something that was much more contemporary. I thought that they were complete opposites, but there are some themes that the movies share even though they’re in completely different worlds. There’s the idea of not letting other people define you, the messages of learning to love your authentic self, and female empowerment.

There’s almost an instantaneous onscreen chemistry between you and Nate Parker. Did you have to build towards that chemistry?
It was really in the script. Gina had spent a long time developing these characters and their relationships, and the different worlds that they inhabit. Everybody sees the gloss and the glamour and the sexuality [of Noni], but in that life and death moment of despair, he sees through all that, and actually gets a glimpse into her soul. And I think there’s no going back from that, for the characters. That’s what makes it a really epic romance – there’s a soul-to-soul connection.

Another key relationship in the film is the one between Noni and her mother, played by Minnie Driver.
Oh my goodness, she’s a goddess. I absolutely loved working with her. She’s so good in this movie. It’s a really difficult role, because in a lesser actress’s hands the character could become this villainous mom-ager. But I think what Minnie really brings is a subtlety and a nuance. You understand that this woman is just at her wits end. She doesn’t know any better, she doesn’t know what to do, she just wants the best for her daughter, but she’s also sort of desperate and hasn’t really fulfilled her own dreams. The mother-daughter dynamic was one of the biggest things that drew me to the movie.

Noni Jean is reminiscent of a lot of current contemporary pop stars, like Rihanna. Who were your inspirations for the character?
We were inspired by many different artists. Obviously artists like Rihanna or Beyoncé that are very contemporary, but also, more unexpected artists like Adele, and a young Lauryn Hill. Gina directed me to biographies of iconic artists like Marilyn Monroe and Judy Garland, to Diana Ross in Lady Sings the Blues, and Bette Midler in The Rose, even Walk the Line. 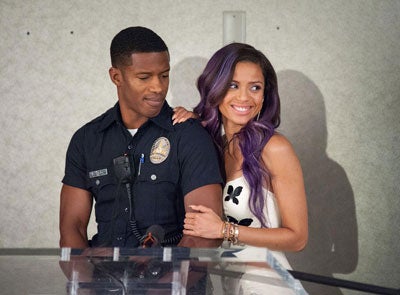 Beyond the Lights/ Relativity Media

And the music of Nina Simone also plays a big role in the film, right?
And of course Nina Simone. She’s sort of like the ghost throughout the movie. One of the first songs I remember dancing around the kitchen with my mum to was a Nina Simone song, ‘My Baby Just Cares for Me,’ so that’s very personal to me. I’d known about Nina Simone since I was six, and I’ve always been a huge fan of her. Artists like Nina Simone and India Arie represented the more soulful side of where Noni wants to be, even though she is in this sort of packaged persona.

Yeah, we see Noni having to navigate fame – the press conferences and junkets and red carpets – much like you do. She clearly struggles with it.
I mean, that was really what drew me to the project in many ways, the psychology behind fame, and how it affects people. If you don’t have a sense of self worth, it doesn’t matter how many accolades people throw at you. You can win all the awards, and have everybody thinking you’re a goddess… if you don’t feel the inner-goddess within you,  it means nothing. We’re all sort of obsessed with presenting a version of ourselves to the world, and it’s like, “Yes, there’s all these different versions, but what’s the real you? It’s okay to be the real you.”

Do you identify with the idea that fame can be a little suffocating?
On a personal level in terms of fame, I mean, I don’t really know yet. I’m not really in that position. It doesn’t affect my day-to-day life. But I’ve spent some time around some quite well known people and I think it’s worth discussing. The mental health of many of our favorite artists and actors is often something that gets swept under the rug. It’s the whole, “Show must go on,” thing. I applaud Gina for revealing the darker side of the entertainment industry, but also providing a hopeful message.

We so rarely get to see on screen depictions of Black women being vulnerable, but also Black women dealing with mental issues, with suicidal thoughts, with depression, the way we do in this movie.
I mean for me, I don’t feel like the story is a race-related story. I think it’s a universal story, and I think that the idea of fame and mental health is universal, first and foremost. But I also do think that it’s really exciting, always for me, to challenge stereotypes. I think that, you know, in terms of how women of color are depicted in the media, how they’re oversexualized in the music industry, it’s interesting just to challenge that, to sort of hold a mirror up to our society and say: “Look, this is what we’re valuing right now, and is that healthy?” Hopefully young girls will see the film and be inspired to not let conceptions of beauty dictate their choices.

During the movie’s New York premiere, there was a scene when Noni started cutting the tracks out of her hair, and the audience cheered. Does not wearing a weave really represent the authentic self?
It’s about choice. There’s no judgement; we can all choose to present whatever version of ourselves we want to present, that’s our choice. But it should be a choice. It shouldn’t be subliminal. You shouldn’t feel like that’s the only way to be sexually attractive or to be popular or whatever. I was really excited by that scene, the message that  no one can tell you “You’re beautiful.” It’s got to come from within. Noni does that for herself.

It’s not so much that Kaz saves her, either.
Right. And that’s the beautiful thing about the love story. Only when Noni can learn to love herself, can she fully reveal her true self to Kaz, and that’s when their love really blossoms – when she sheds the armor.  We all have armor, and sometimes you need it. it’s like whatever you’ve got to do to present yourself and get through the day. But I think it’s always important to identify that you’re choosing to do that.

Beyond the Lights opens in theaters this Friday, November 14.
Loading the player...