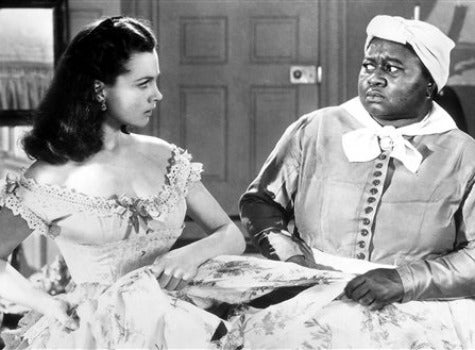 Gone With The Wind,’ The celebrated four-hour film that takes place in the South before, during and after the Civil War, is celebrating its 70th Anniversary with a Blu-Ray release.
While ‘GWTW’ swept up eight Academy Awards including Hattie McDaniels’ Best Supporting Actress win, a first for AAs, back in 1940, the film is surrounded by much discontentment for the way slavery is depicted–as an “noble institution,” says the Seattle Times. The film does not illustrate realities of slavery, like broken families, captives being whipped, chained and raped. Instead, slaves are happy in their prospective positions, whether in the field or in the home. House slaves, like McDaniels’ character Mammy are treated more like a member of the family than a non-paid worker with the lowest social standing.
“As for Reconstruction, “GWTW” portrays it as an era in which the defeated South is further imperiled by freed blacks, the occupying Union army, Northern “carpetbaggers”and Southern “scalawags,”and is saved — along with the honor of Southern womanhood — by KKK-like vigilantes. In reality, Reconstruction offered newly freed slaves their first opportunity to live independent lives in a democratic society, only to have their hopes dashed by the resistance of white Southerners, the lack of economic opportunity and the abandonment of support by the federal government,” the Seattle Times article reads.
While these factors are notable, the film was groundbreaking for providing a number of roles for Black actors and many AA’s celebrate McDaniels’ Oscar win.
Similarly to McDaniels, in recent years, Halle Berry’s historic Best Oscar Award win for her role in ‘Monster’s Ball’ in which she is depicted in a love scene with a racist character played by Billy Bob Thorton, caused much controversy.
What are your thoughts? Can we recognize ‘GWTW’ for its flaws and celebrate it for the gains that it afforded AA’s in 1939?