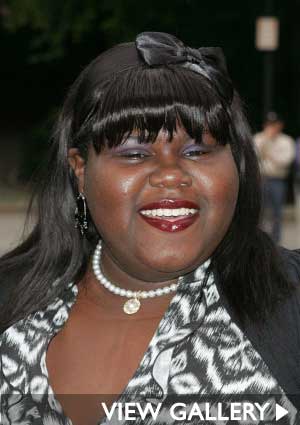 If you know only one thing about Gabourey Sidibe, you realize she is not the abused, downtrodden star of “Precious” she nails on the big screen. The psychology-trained thespian loves herself just as she is, and even lives with the man of Precious’s dreams (literally). We caught up with the instant star to see how she managed going to such a dark place alongside Mo’Nique and what keeps her smiling bright.

ESSENCE.COM: You have caught America’s attention with your portrayal of Precious? How did you get into her mind?
GABOUREY SIDIBE: I know this girl in a lot of different people. I’ve seen her walk down the street. I’ve been friends with her and stopped being friends with her. She’s me in a lot of ways. So I feel like I know her. I was a real big fan of the book and I hate when adaptations get it wrong. Before this, I was psych major, going  to become a therapist. I’ve been reading up on abused children since I was in junior high and knew a lot of their behavior patterns from my training, so it really helped me to dive into the persona of Precious. I had to take my knowledge and bring it. Also, a lot of it was through the director Lee Daniels.

ESSENCE.COM: And this film already has Oscar buzz. What sparked your interest in acting and how did you prepare for your first role, which goes to such a dark place?
SIDIBE: I never wanted to be an actress, not ever, not until I was hired. On a whim, I went to an open audition and was totally scared. I was living a full life and suddenly with one sentence, my whole life changed, “I want you to be in my movie.”  I was afraid of what that change meant and that now I actually have to be an actress. I never had any acting classes. It’s all instinct. The character is not some Hollywood invention. She’s real people, so it wasn’t hard.

ESSENCE.COM: On the film, Mo’Nique is terrifyingly realistic as your abusive mother. Were you two able to snap back to yourselves in between cuts or did you keep your distance? SIDIBE:. Because of the subject matter, we would all just walk around in a funky mood, if we didn’t get out of the scene. While Mary and Precious are enemies, Mo’Nique and Gabby are friends.  As soon as the director says cut, we would hug each other. We would dance and sing and she would crack jokes. We had to do something to lighten the mood. Every day on set was like a party. It was the best time of my life.

ESSENCE.COM: Have you always been so fearless?
SIDIBE: God no! I was not always confident. Once I got out of being a teenager and grew into my whole self, my mind, my body and spirit–that’s when the confidence came.  Because you can’t wait for someone else to tell you that you are beautiful or that you are anything. Because, should that person cease to exist, so does your confidence. So it comes from me. I had to learn to love myself.

ESSENCE.COM: How are you handling the spotlight and keeping from being typecast to this role?
SIDIBE: We did a small film for not a lot of money and we didn’t know what would happen. The director thought for sure it was going straight to DVD. It’s so amazing to see that people want to see the film and it already has a huge following, and that huge following alone is Oprah, our executive producer.  I’m not worried about being typecast.  People meet me and they are surprised I’m not Precious. It’s a very distinct difference.  I don’t see myself when I see the movie, I see Precious. In my next movie, I play the victimizer of the school, who’s drinking 40s and making out with boys. Precious definitely didn’t do that.

“Precious” is now in theaters.

Gucci Mane And Keyshia Ka'oir Are Having A Baby!