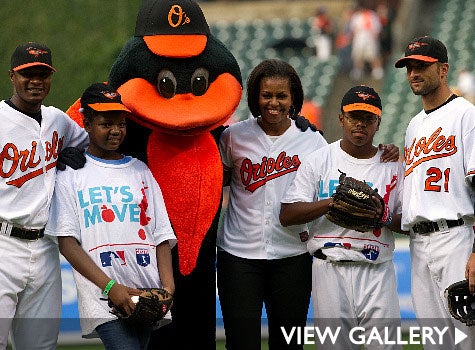 First Lady Michelle Obama visited Baltimore’s Camden Yards to pitch more than a baseball during a game between the Baltimore Orioles and Tampa Bay Rays. She was there to promote her “Let’s Move!” anti-obesity campaign which aims to get kids like Boys and Girls club members Christina McCray (left) and Jordan Antwon Lewis (right) exercising and provide them with better access to healthy foods. The campaign has partnered up with Major League Baseball to roll out a series of radio and television public service announcements. Baltimore Orioles players Adam Jones and Nick Markakis and the Orioles mascot The Bird also joined her on the mound.
Loading the player...