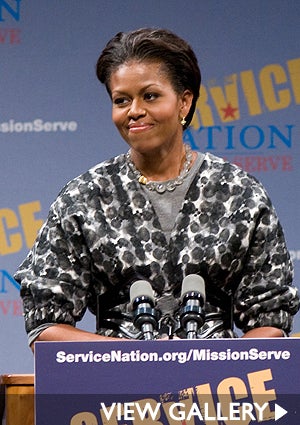 Not that she was elected to public office or anything, but, according to recent polls…Michelle Obama’s numbers are down.
A recent Gallup poll says the First Lady’s favorability has slid 11 points since last March, from 72 percent to 61 percent. In a study from South Carolina’s Winthrop University, which looked at her approval ratings in 11 Southern states, while nearly 78 percent of Democrats had a favorable opinion of Mrs. Obama, only 26.2 percent of Republicans did.
The ratings fall comes despite Mrs. Obama’s decidedly non-controversial activities such as hosting hundreds of schoolchildren at the White House, most recently to launch a mentoring program for teenage girls, starting a White House garden to advocate healthy eating, and amplifying the importance of serving military families. On the other hand, she has occasionally used her platform to talk about President Obama’s goals for healthcare reform, so maybe that’s behind the dip in numbers.
Or is it that she hasn’t been substantial enough? In a recent Newsweek essay, Allison Samuels wrote that she should take on heavier issues, arguing that military families and gardening will not build a lasting legacy.
“I want to know how she feels about children killing children back in her hometown of Chicago. Or whether she has any ideas about how to stop the ever-increasing numbers of African-American women falling victim to AIDS,” Samuels writes. “These too-often-neglected issues need a face like Michelle’s.”
All the polling on Mrs. Obama initially surprised me, given that she’s not in charge of White House policy or legislation. But it’s not an unprecedented move. People were also polled on Laura Bush, who maintained a high approval rating (and so nobody really talked about it).
What do you think–as the first African-American First Lady, should Mrs. Obama elevate topics that affect our community by giving her stance on crime and HIV, or is it fine for her to focus on more traditional issues?
Get Obama all the time on Cynthia Gordy’s blog Obama Watch.