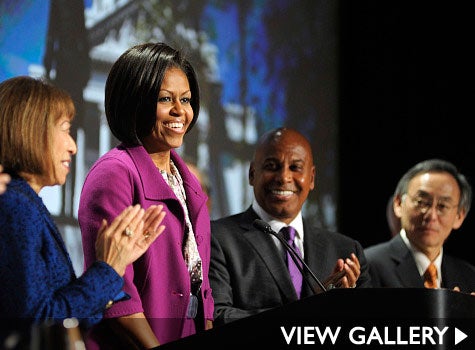 Last week we reported that fifty percent of African American women are obese and that the rate of obesity has hit a plateau. Now Michelle Obama is asking the mayors of cities around the country to help fight the epidemic. The statistics still never fail to take my breath away,” The First Lady said at the U.S. Conference of Mayors yesterday. “…Leadership is about having the foresight and the courage to make those sacrifices and investments in the short run that pay big dividends, often paying for themselves many times over in the long run,” she continued. Some mayors around the nation have taken steps to slim down their cities and Michelle Obama commended them for their efforts. In New York City, Mayor Bloomberg has asked food chains to list the calories in their meals, to help customers make healthier decisions. In Somerville, Mass, Mayor Joseph Curtatone sponsored restaurants that agreed to offer decreased portions and low-fat meals. Kentucky Mayor Elaine Walker created an online campaign to push Bowling Green residents to exercise in the city’s parks and trails. And Mayor Mick Cornett of Oklahoma City campaigned for his town to lose 1 million pounds and launched a Web site with helpful weight-loss information, including ways for residents to “track their progress.” Read the latest info on the nation’s obesity rate Star Jones spoke out about obesity in America Keep up with the First Lady’s agenda