Skip to content
By Lathleen Ade-Brown · Updated October 28, 2020
It’s hard to refute the indelible mark that ’90s R&B girl group TLC left behind. In fact, numbers prove the trio to be one of the best-selling girl groups of all time. This year, surviving members Tionne “T-Boz” Watkins and Rozonda “Chilli” Thomas will celebrate TLC’s 20th anniversary while simultaneously remembering the tragic loss of their band-mate Lisa “Left Eye” Lopes, who passed away 10 years ago today in a car crash in Honduras.

To add to TLC’s 20th anniversary celebration, VH1 is preparing to go into production for a scripted biopic on the group. T-Boz and Chilli recently spoke with ESSENCE.com about the tragic loss of Left Eye, who they want to play them in their biopic, and a 20th anniversary TLC tour.

ESSENCE.com: Today marks 10 years since we lost Lisa “Left Eye” Lopes in a tragic car accident. What do you remember about that day?
T-BOZ: She died a day before my birthday. I remember everything. I was with security in my Porsche and I said to them, “I feel like I’m going to get in a wreck and I want to go home.” The driver said: “Well, that’s on the other side of town.” I didn’t care; I wanted to go home. I just felt something was going to happen to me, but it wasn’t me — it was Lisa. I was sitting in a rocking chair in my daughter’s room after putting her down when I got a call from Chilli. She was screaming. I had just gotten out the hospital from fighting sickle cell so I had to be careful about getting upset. Everybody was trying to keep me calm.

I remember staying up all night and Patti Labelle and Missy Elliot calling me. Whitney Houston was at Lisa’s funeral. She sat behind me and rubbed my shoulders for two hours, while telling me, “It’s going to be okay, it’s going to be all right.” Right before that, I remember Lisa played a trick where she went missing and nobody knew where she was. This was the one time I wish she was joking and doing one of her stunts, but she wasn’t.

ESSENCE.com: People playfully identified her as the crazy one in the group because of the notable fire in 1994, among other things. What’s the biggest misconception about Left Eye?
T-BOZ: That’s the part that sucked. The fire could’ve even been stopped if they stopped acting like little girls and put the fire out. That really could’ve been settled differently. I just really wish people would’ve known her for the sweet passionate person she really was. She was very creative, too. I remember I was in the hospital for four months and she sent me a clock that she made and the clock read: “Take all the time you need.” She really put thought into things.

CHILLI: People didn’t understand how much of a heart she really had and how passionate and giving she was. She might have come across as someone who wanted to start trouble all the time, but that wasn’t it; she just had a lot to say. Sometimes when you speak what’s on your mind — I’m talking everything on your mind, and people can get a misconception of you. So because she spoke her mind, all of the time, it caused people to misjudge her. 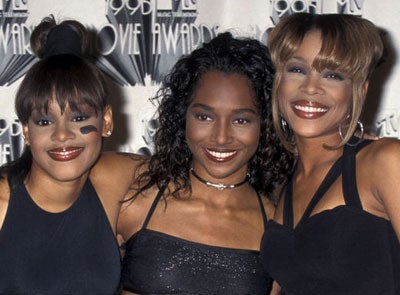 ESSENCE.com: A lot of people believe TLC was feuding when Left Eye passed. What was your relationship like at the time?
CHILLI: It was actually very good; we had started working on the last album. We all had solo deals. I was just like, “We have to do another record” — I was willing to put everything on hold. That was the last time we got to spend quality time together before she passed. The relationship was good; she was acting silly again, playing pranks on people. Her death was very devastating for us, but I can look back and say I was happy about what our relationship was like, at that time.

T-BOZ: No matter what, everyone will go through a disagreement — that’s what makes us all different. So it’s unrealistic to tell anybody that we all agreed with everything that everyone did or said. That doesn’t happen in a real relationship. At the time, she just didn’t agree with what the record company was doing with the project, so she felt strong about standing up about it. It had nothing personal to do with the group members. I didn’t have a problem with that.

ESSENCE.com: Tell us about the VH1 biopic. Are you looking to have someone in Hollywood play you guys, or all new unknown actresses?
T-BOZ: It’s going to have to be new kids; I can’t think of anybody that can play us. It’s not just about looking like me or dressing like me, you have to have the attitude, the dance moves. The writer of the biopic, Kate Lanier, is amazing. She did the movies Set It Off and What’s Love Got to Do With It. Hopefully the movie will be out before the end of the year.

CHILLI: It’s going to be like a movie-of-the-week on VH1. You know how the Jackson Five have the movie The Jackson Five: An American Dream? It would be like that. I love how they still show the Jackson Five movie now; they will show that for the next 40 years. [Laughs] I’m really excited about it; this was a dream of mine. I knew that we would have a movie about us one day. I want to go for someone unknown to play us. I really would prefer to reach out and find someone that resembles us and who really has the acting chops and who can dance.

ESSENCE.com: When you think of TLC’s legacy, what are you most proud of?
T-BOZ: You know how now it’s easy for Black people to make it on pop radio… Back then it was hard. Michael Jackson was probably one of the first Black people to get on MTV and VH1 and then TLC “Waterfalls” was probably the second, it was so hard. I remember getting flowers for making it on MTV and then a special gift for making it on VH1 — that was like a big deal! We had to bust our butts to get on a show. When I say we broke records and I worked for mines, I worked for mine! We had to work for every last single thing.

CHILLI: From the beginning to the middle and we’re not at the end yet but I loved that we never compromised our values when it came to the subject matter and what we talked about in our songs and how we represented ourselves as women. Starting out as young women, we didn’t care that people thought that we were a fad or if people thought we didn’t dress girly enough — we were just like, “Whatever.” We were able to accomplish that with three totally different girls, in a group.

ESSENCE.com: Are we going to get another TLC album or a 20th anniversary tour?
T-BOZ: Yes, we’re going on tour; we are in negotiations now with LA. Reid, so we’ll see what happens. A lot of cool things are coming up.

CHILLI: Another TLC album? Yes, that’s for sure! We’ll have new music right after the movie drops. We have everybody that was there with us from the beginning on board. We’ll definitely have a tour; I just don’t know what we’ll call it yet.
Loading the player...