Tia Mowry-Hardrict goes from party girl to full-time stepmom in one weekend on her new Nick at Nite sitcom Instant Mom. The show follows her character Stephanie as she tries to juggle her older husband (played by actor Michael Boatman), her bossy step kids, and demanding mother (played by Sheryl Lee Ralph). Mowry-Hardrict spoke to ESSENCE.com about every new mom’s desire to please, getting back on a sitcom, and unleashing her crazy side in the new romantic comedy, Baggage Claim.

ESSENCE: Your Instant Mom character Stephanie has no boundaries when it comes to child rearing. She can’t decide whether she’s a stepmom or the best friend.
I think Stephanie, like every mom, is trying to find a balance. This is new to her, so first of all she feels as though she has to impress the kids because she’s not their real mom so she’s trying to win them over by trying to be their friend. But we all know at the end of the day you can’t just be friends with your kids, because you give them an inch they take a mile. So it’s trial and error with her. We’re not perfect. Being a mother and a parent does not come with a handbook. 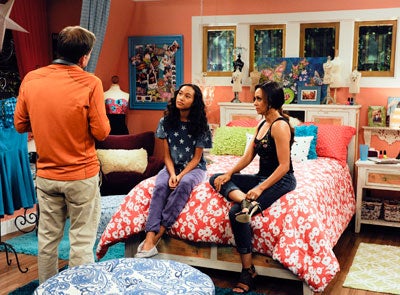 ESSENCE: As a new mom yourself what’s some of the more ridiculous stuff you’ve done for your two-year-old son Cree that you used as material for Stephanie?
Just trying too hard. I think when we’re new moms you have this perfect schedule and you want everything to go perfectly. You have everything laid out for your kid, whether it’s bottles, pampers, or clothes. You just want everything to go right. So I think that’s kind of what I’ve applied to my character. Her optimism and enthusiasm about being a new mom is how I was.

ESSENCE: It’s great to see you back on a sitcom. The last time we saw you on this kind of sitcom was on Sister, Sister years ago.
I love this schedule. It’s great for families because it’s very predictable and the hours aren’t that long, especially when you’re working with kids you have to get in and get out. I’m like, ‘Oh, we’re done? I get to come home and be with my son?’

ESSENCE: You’re also in Baggage Claim (out today). I don’t think we’ve ever seen you play such a crazy person?
A lot of people don’t know that I had a choice to choose between two girls. The director, David E. Talbert, said Tia, I want you to play Janine, which is the character I play, or another role which is more like a girl next door. I said no even though the girl next door had a bigger part. I said I want to play this role because I want a challenge. I want to be able to do something that people wouldn’t necessarily see me doing, they wouldn’t expect it and I enjoy that.

ESSENCE: You just turned 35 and you’ve accomplished so much. So many of us have that “Oh my God, I’m 35” feeling.
I feel like there’s so much more to accomplish. I have admitted that I’m a workaholic. I love what I do. I love being able to escape from reality and be able to dive into a character and perfect that character and become that character. For some reason it’s all I know so it’s what I live and breathe for but there’s so much more that I want to do. I want to continue to do film. I did Baggage Claim and one thing that I like about film is that film is very raw. You can go places with your emotions that you’re not able to with television. Some people may not know that, but all my life has been a challenge. I had to fight for the role of Melanie. My sister and I, it was a challenge getting Sister Sister. A lot of people don’t know that the show hadn’t gotten picked up until the last minute. There are more challenges out there. I want to get into meatier roles and I want to continue to get into my brand that my sister and I have.

ESSENCE: How did you celebrate 35?
I was with my husband who was Transcendence in New Mexico with Johnny Depp and Morgan Freeman. My son’s birthday is June 28th so we celebrated it together and we went to this amazing place. It’s an organic lavender farm in Albuquerque and it was just nice and quiet. We like doing normal things because our lives are so hectic and busy. I value normalcy and so to be able to just bring it down and focus on being a normal family, that’s what we did and I enjoyed it so much.