There was a precise moment when filmmaker Shola Lynch was interviewing Angela Davis when all the iconography around her—the raised fist, the Afro, the FBI Most Wanted posters—receded into the background, and she became Angela, a woman in love.

As Davis described the first time she met fellow freedom fighter and “Soledad Brother” George Jackson in person, her professorial aloofness melted. “She fixes her hair and pats it,” recalls Lynch, who researched Davis’s story for eight years. “She’s shy. So I really had to listen and watch to appreciate what she had given me and what she shared.”

Until she agreed to participate in Lynch’s riveting new documentary, Free Angela and All Political Prisoners, opening April 5 in select cities, Davis had avoided talking about the affair that was key to the government’s 1972 murder conspiracy case against her. “Emotional relationships are really important when your freedom is so restricted,” Davis says of the bond she shared with Jackson. “So that relationship was very important to me.”

George Jackson was one third of the Soledad Brothers, a cause célèbre for 1970’s leftists. Among their many supporters was Davis, then 26, a professor who had been fired from UCLA. Her crime? Being a communist. 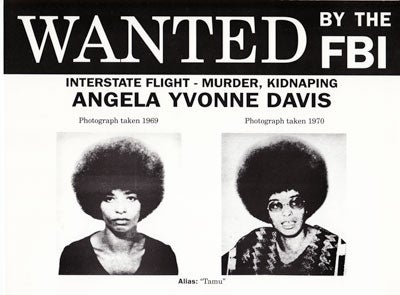 Davis became friendly with George Jackson’s teenage brother Jonathan, who worked security for her at rallies. One day in August 1970, he decided to take justice into his own hands. First he obtained guns registered in Davis’s name without her knowledge. He then carried them into a Marin County, California, courtroom, where he attempted to kidnap a judge, a prosecutor and three jurors to negotiate for the release of the Soledad Brothers from prison. Four people, including Jonathan, were killed in the resulting shoot-out.

Davis said she owned the guns because of threats to her life, but she had no role in planning the kidnapping. Fearing she would never get a fair trial, Davis fled California and became one of the FBI’s Most Wanted. The film tells her improbable story: Her middle-class roots in Birmingham, Alabama; her philosophy studies in Germany; the 2,000 people who packed her first UCLA lecture; the FBI hunt; people all over the world rallying to “Free Angela”—and, most unbelievable of all, an all-White jury acquitting her of all charges.

“We were up against the most powerful forces around the world and we built a movement that eventually led to my freedom,” says Davis, now 69, speaking from her home in Oakland. Davis never publicly admonished the younger Jackson or the plan some in the movement described as a “slave rebellion.” ” I tried to understand why he tried to do something like that,” says Davis.

“Like so many young people, [Jonathan Jackson] was just really impatient,” Davis says wistfully. “He was not willing to wait to see the results of the movement we were building.”

Catch Free Angela and All Political Prisoners this Friday, April 5 in select cities.