Cue the nostalgia — Gap is going retro with the announcement of a ’90s-inspired collection called Archive Re-issue.

And because you can’t reference ’90s style without mentioning Naomi Campbell, the fashion icon makes a special cameo in the new campaign wearing a signature Gap pocket tee that she modeled for the brand back in 1992 for  Steven Meisel-shot ad.

We’re equally as excited to see Evan Ross among the all-star cast since he has proven himself to be in the next generation of cool.

We recently got the opprotunity to chat with the 28-year-old actor about his new Gap collabo and how the famous woman in his family — mom Diana and sister Tracee Ellis Ross — have inspired his cool-kid style. 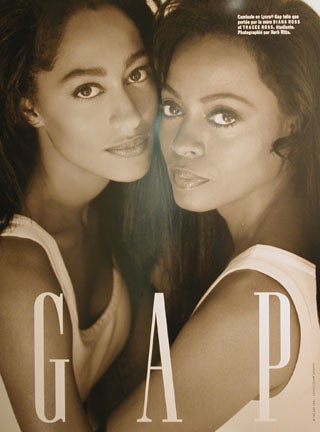 When it comes to personal style, Ross learned lessons we would all expect from an offspring of Diana Ross’ — fashion is always about doing your own thing.

“I definitely beat to my own drum and wear what speaks to me more than anything else,” Ross told ESSENCE. “I remember when I was younger, in high school and I wore an outfit and someone said something like: ‘what are you wearing?’ and she [Diana Ross] was like, ‘you set the trend, you don’t follow it.'”

Seems like a fitting response from someone that most of us know as one of the most stylish women, ever.

Channeling his love of style into the new campaign with Gap, Evan says working on the project was “incredible.”

“I’ve been a fan of it my whole life so to be a part of it was just really exciting,” he said.

“That was amazing,” Ross told ESSENCE. “She’s a friend of mine but come on when she steps on set it’s like off the charts. She’s Naomi Campbell. And she was just so cool and so sweet with everybody especially since she’s been involved with some of Gap’s most iconic campaigns. It was awesome.”

Check out the “Generation Gap” video below:

Shop the collection when it hits stores Feb. 7 on Gap.com.

Triller Is Being Accused of Failing To Pay Black Content Cre...