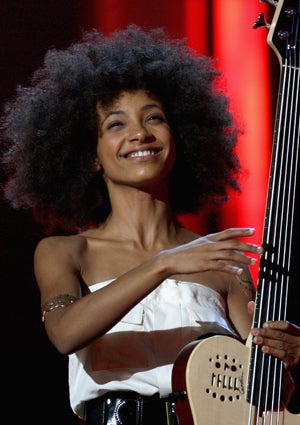 Few people can call the musical genius that is Prince a friend, but Esperanza Spalding is one of the lucky ones. His purpleness invited the 25-year-old to perform during his BET tribute alongside Patti LaBelle, Janelle Monae and Alicia Keys, introducing Spalding to an entirely new audience. Esperanza, whose name means “hope” in Spanish, released her self-titled debut album in 2008, which rose to the top of the Billboard Contemporary Jazz chart and remained there for over one year. Today, the stand-up bass player and composer is releasing her sophomore album “Chamber Music Society.” ESSENCE.com spoke with Spalding, who’s currently in Finland on tour, about meeting Prince, writing songs about escorts and the meaning of “Chamber Music Society.” ESSENCE.com: How did you join BET’s Prince’s tribute, where you performed “If I Was Your Girlfriend”? ESPERANZA SPALDING: I think Prince just invited me like ‘Hey, get Esperanza.’ We’ve become good friends so I think that was a kudos to me because that performance gave me exposure for someone in the Jazz field that I wouldn’t normal receive. ESSENCE.com: How did you meet Prince? SPALDING: I did an interview with Tavis Smiley, who’s close to Prince, and he thought Prince would like to hear my music. That was four years ago maybe and he reached out to my manager and I sent him a demo I had because I didn’t even have a record yet. Then Prince asked me to come to Las Vegas and jam with him and we became friends. If I were me listening to someone say all of this, I would think it’s pretty crazy too, but Prince is just such a wonderful, creative and loving person. He’s such a fireball of talent, creativity and intelligence and he invites people into his sphere for discussion, so I admire him and who he is overshadows what he does. ESSENCE.com: Your album “Chamber Music Society” hits shelves today, what’s the significance of that title? SPALDING: I’m trying to bring together these two molds of music, you have the classical realm where things are fully written out for you and you have the Jazz side of things which you interpret through improvising. I’m trying to bring those two worlds together. ESSENCE.com: Some of your songs have lyrics, some don’t. Why scat over “Knowledge of Good and Evil”? SPALDING: That’s an interesting question, I don’t really decide outright ‘Well, I’m going to scat on this one.’ That composition, I wrote it using the voice of the lead instrument, that particular piece works best with a full band. ESSENCE.com: How did you choose to play the bass? SPALDING: I started on the violin because that was the first instrument that came to my awareness but I was just curious about music. So when I saw the bass, I fell in love with its part in Jazz and the ability to improvise really captured my attention. ESSENCE.com: Growing up, you wrote songs about “red wagons and toys”? SPALDING: I was in the rock band growing up in Portland and it really impactful to me. I wasn’t accustomed to writing lyrics so I would write about everything from the color of the trees to red wagons to a Mom who moonlighted as an escort, random things that matched the concept of the song. Actually, that’s still how I write music now. ESSENCE.com: We’re catching you on tour in Europe now, but are you touring in America? SPALDING: Yes, we’re going home now to prepare music for the next tour, which begins in September and goes through the end of October.