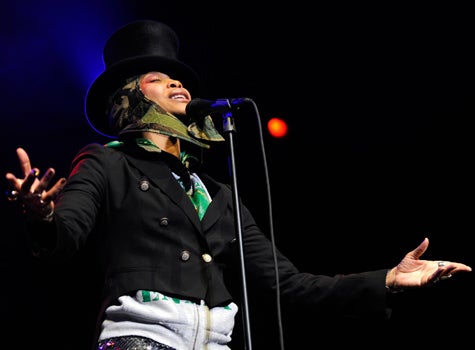 This isn’t your typical love album. Erykah Badu–aka Low Down Loretta Brown, aka Analog Girl in a Digital World, aka @Fatbellybella, aka Medulla Oblongata–returns today with the insanely imaginative album “New Amerykah Part 2: Return of the Ankh.” While several megastars drop albums today, it is Badu who unequivocally stands in the spotlight. After the world premiere of her symbolic one-take video, “Window Seat,” where she bared it all–literally–to express the importance of individuality, why wouldn’t she be the one receiving the shine for her artistry? Since its premiere, Badu has stimulated minds, sparked dialogue, introduced the concept of “groupthink,” and ingeniously captured the very short attention span of the internet. What this group thinks is: we finally have our first classic album of 2010. Intended to serve as follow-up to the politically driven “New Amerkyah Part 1: 4th World War,” Badu’s attention is now off societal issues and is instead focused on matters of the heart. And yet “Part 2” both directly and indirectly addresses the reasons at the core of the plethora of problems presented in “Part 1.” Erykah uses the album filled with magnetizing melodies to drive home the fact that without self-love, there is no real love, and without real love the only thing that will exist, as both a society and individually, is fear. Although the tracks “Umm Hmm,”  “Gone Baby, Don’t Be Long,”  “Fall in Love (Your Funeral),” “Turn Me Away (Get MuNNY),” are all aurally pleasing heavy-hitters on this album, it is the first and the last track that set and solidify the mood of “New Amerykah.” The album begins with  “20 Feet Tall,” an introduction that features Badu embracing self-determination and restoring her identity musically and metaphorically. Erykah’s warming vocals sing, “You built a wall / a 20-foot-wall / so I couldn’t see / but if I get off my knees / I might recall / I’m 20 feet tall,” while cutting chords compliment Badu’s frustration in doubting her inner strength, and why she will not compromise or allow anything to impede her growth. The 10-minute outro, “”Out My Mind, Just In Time,” serves as the perfect conclusion to a seamlessly crafted album. The three-song suite is similar conceptually to the “Mama’s Gun” track, “Green Eyes,” using three completely different melodies to discuss an interrelated story. She tells a story of a woman that would do absolutely anything for her lover: “I’m a recovering undercover over-lover / recovering from a love I can’t get over…I’d lie for you / and cry for you / Pop for you / Break for you…,” into the second movement questioning the wisdom of falling in love and staying in love. The album and the song ends with Badu accepting that she’s involved in a toxic relationship, ” “f**k this…I am so addicted I can’t quit…,” finally deciding to stay and ride it out. This decision emphatically puts her in the same place she was in at the beginning of the album, and cleverly causes the listener to place this disc on Repeat. Since ’97, Badu has worked to do more than simply create good music. With a voice that’s so strangely enchanting coupled with her penetrating songwriting skills, she has the ability to emotionally engage you not only to listen, but also to grow, to evolve. This atypical love album will take you deep, and leave you puzzled as to what she did to make your heart think and your mind to feel. In the words of Badu, “That’s the butt naked truth, Amerykah!” Take a look at the evolution of the artist we know as Erykah Badu. Read more: