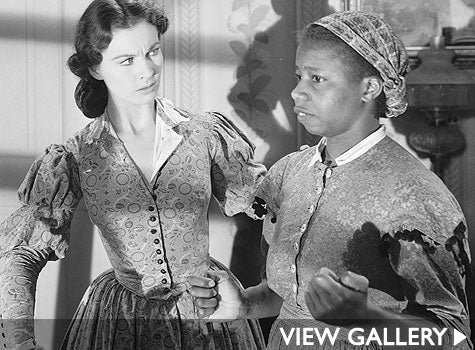 New films ignite a debate about negative portrayals of Blacks on the big screen.

The more things change the more they remain the same, at least in Hollywood it seems. If you think movie moguls and film folks has always been liberal and sensitive to racial injustices, pick up Race Results: Hollywood vs. the Supreme Court, Ten Decades of Racial Decisions and Film (Cool Titles,  $25.95), Eileen C. Moore insightful study of racial stereotypes in film throughout the twentieth century. Or see “The Blind Side” and “Precious: Based on the Novel Push by Sapphire,” two of this season’s most buzzed-about films, which critics suggest feature African-American families at their most dysfunctional.

Blind Side, a Sandra Bullock vehicle, charts the true story of Baltimore Ravens rookie offensive tackle Michael Oher, who was taken in by real-life White couple Leigh Anne and Sean Tuohy. They enlist a tutor to help Big Mike overcome many challenges including illiteracy. Precious is the fictitious story of overweight, illiterate Clareece ‘Precious’ Jones ( Gabourey Sidibe), who is sexually abused by her father and physically and emotionally abused by her mother, Mary Jones (Mo’Nique).

While “The Blind Side” continues to defy box-office expectations (the film has grossed $129 million in just three weeks), “Precious,” it seems is slipping with moviegoers. The film, now in more than 600 theaters, is now the twelfth most popular film at the box-office with a gross of $36 million, good for an independent film, but not great if it’s to compete with heavy-hitters (“The Princess & The Frog,” “Nine,” “Up in the Air”) into the important holiday season. The film will have to make a great showing during the all-important awards season but Oscar harbinger The National Board of Review recently omitted “Precious” from its influential top 10 list, and shoo-in Supporting Actress Mo’Nique was passed over for Anna Kendrick for “Up In The Air.”

New York Times culture writer Felicia R. Lee recently asked in a much-discussed story  if “Precious” is “a  reinforcement of noxious stereotypes or a realistic and therapeutic portrayal of a black family in America?”

Check out our gallery of films that sparked a racial furor because of their depictions of African-Americans.