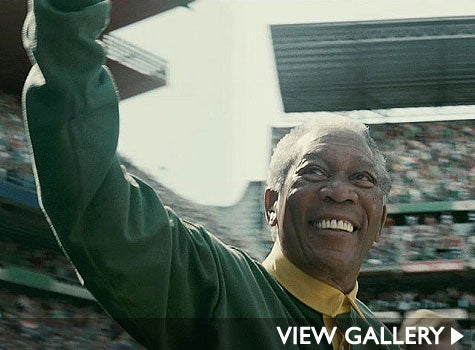 As history has shown, everyone loves a good sports film. From “Rocky” to “Chariots of Fire,” “Remember the Titans” to “The Blind Side,” moviegoers can’t get enough of real-life, come-from-behind stories of victory in the face of considerable odds.

This truism is one producers of the gallant new film “Invictus” bank on.

As much a rugby flick as it is a snapshot of South African savior Nelson Mandela’s life post-Apartheid, viewers won’t have to decide which team they’ll root for in this film–the entire southern region of the African continent will do nicely.

And Morgan Freeman–Mandela’s doppelganger in the biopic (nailing everything from his gait to his diction)–wouldn’t have it any other way. He feels the film–which chronicles the 1995 World Cup in South Africa and Mandela’s first year as president of the ANC–gives viewers the ultimate peek into the leader’s political genius.

“Madiba understood that sports makes everybody one,” says the 72-year-old actor of his “labor of love” (he purchased the rights to the script, convinced Clint Eastwood to direct “Invictus” and made countless trips to South Africa to shadow Mandela before shooting began this past April).

“When he went to Barcelona for the Olympic Games in 1992, [fans] started singing ‘God Bless Africa.’ I think he got the idea [to bring Blacks and Whites together through rugby] from that. The Olympics are probably the best example of how sports unite people,” Freeman says of the real-life events that inspired the book-turned-film, which has already earned him a Best Actor nod (and Eastwood, best director) from the National Board of Review.

Although the Golden Globe winner shares the spotlight with a beefed-up Matt Damon in the movie (Damon plays the rugby team captain, whom Mandela apparently befriends), Freeman says the Nobel Peace Prize winner’s role in South Africa’s historic win over New Zealand cannot be diminished. After all, if it weren’t for his vision and leadership, one could argue, it might never have happened. To get a better sense of the man he’d portray, Freeman says he made two trips to the legendary Robben Island, where Mandela was imprisoned for nearly 20 years.

“To stand in that cell and look around … it’s a feeling I can’t describe,” says Freeman. “I remember Matt [Damon] stretching his arms out and measuring the space. I imagine most men would do that–imagining how much turn-around room is in there. You get a sense of the time [he spent there] and it’s a little painful. There’s a pain that you feel inside in your heart. Like, gosh, how can you do this?”

If Freeman has any thoughts on his own impressive turn as Mandela (played previously by Sidney Poitier, Dennis Haybert and Danny Glover on screens big and small), he is keeping them to himself. The actor is famous for not watching his own movies, and “Invictus” is no different, although he admits he may have to bend when he attends a South African screening of the movie with the real Mandela over the weekend.

“I’m an old stage actor,” he says. “As such, you get the feeling of whether you did the job right or not strictly from the audience. If you get applause you know whether you can feel good or not. Not to say I have never been impressed with myself but most of the time I’m not so impressed. The film is great,” he adds sheepishly. ” I did okay.”

“Invictus” is in theaters nationwide this Friday.

FOR OTHER ACTORS WHO HAVE PORTRAYED NELSON MANDELA IN FILM, CLICK HERE.