It’s a time of celebration, (a few broken hearts), but an overall recognition of art well done. While I’m such a fan of acknowledging a job excellently executed, a part of me feels deeply for those nominated who don’t end up winning. Yeah, yeah, there can be only one winner, I get it. But I’m talking about those who may, for just a split second, feel like because they were not chosen for the “Best (Fill in your fancy),” they may have been lacking something in their art. And maybe to some, they were. But then again, maybe not.

After all, the year that Jamie Foxx won for his exquisite performance in Ray, Don Cheadle was nominated for his ground-breaking work in Hotel Rwanda (with a few other Powerballs in that category too) and it was a time where you wished there was more than one Oscar waiting in the wings….

Alas! It is not the way of this world, which is fine. But I couldn’t help but speak out to the other ways that society convinces us to fall into the death trap of comparison. Who is greater? Better? Skinnier? Richer? Prettier? Smarter? More talented? Who is the best? The list goes on.

I say ‘death trap’ because once you fall into playing this futile game, things begin to erode. Your security, self-esteem, parts of your identity, but most importantly, your vision. Although we are running this race together, we surely are not in the same lanes. We each have our own paths, own trajectories, own purposes to fulfill, so much so that if everyone else in the world disappeared right now and left you standing there, you would still have your own journey to complete!

But it gets difficult when we see people around us doing various things (worse if they are in the same profession as we are) and producing different results. We start to feel less-than and incompetent. This leads to what I like to call: ‘lane-shifting’: People start drifting over into someone else’s lane and begin to run THEIR race.

How are we going to run someone else’s race when the medal at the end of their finish line doesn’t even belong to us?! Stop. Let’s all stop for a moment and realize this; we EACH have a lane. It has nothing to do with the Cookie on the left or the Boo-Boo Kitty on the right. 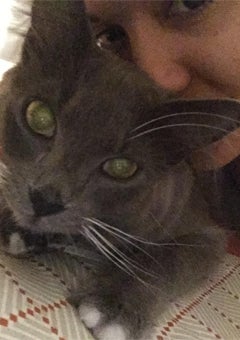 Don't worry about the Boo-Boo Kitties on the right...

The best work we can ever do in this world is work on being the greatest version of ourselves so we can continue to give the highest version of this to others.

In all of this, don’t forget to celebrate others as they cross each mark. Lift. Higher.  Lift others and yourself as you rise above this mess of comparison. Thank God for those who embraced their true selves and gave us gifts that only they could give: from Steve Jobs to Michael Jackson to Ray Charles to Mark Twain. There are so many more and the list goes on.

Basically, what I’m saying is:

We need you. The best version of you. You’re here for a reason, and we can’t wait to see what that is.

Stay in your lane.

Get that medal (or that chiseled little bald-headed gold man).

I’m celebrating with you.

Until we cross the finish line,

Tune-in every Wednesday to catch Grace on EMPIRE!