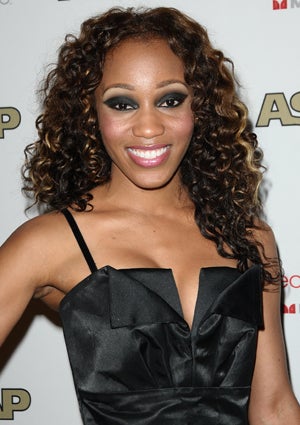 The music game has changed. You no longer have to pass along your demo tape to everybody who is “somebody” — fingers crossed — to get discovered by a label and blow up. Those days are long gone. Just ask the newest R&B ingenue Dondria Fields, 24, who is signed to Jermaine Dupri’s So So Def label. The Oklahoma-born, Texas-bred singer, whose hit single “You’re the One for Me” is riding airwaves everywhere, will tell you that all you need is a computer, a mic, and webcam. That’s exactly how Dondria, who previously went by the moniker Phatfffat, broke onto the scene. The singing sensation grabbed the world’s attention after having her YouTube video posts earn an extremely large following. Like they say, the rest is history, or more appropriately her-story. Dondria chops it up with ESSENCE.com to discuss her viral start, Janet Jackson, and how she feels being compared to others in the industry. ESSENCE.com: Dondria, your story is amazing, how did this all start? DONDRIA FIELDS: I always knew I wanted to be a singer from the time I was younger and was involved in singing competitions. In 2006 I was told to go onto YouTube to view a fight video, and noticed on the side how many people were using the site to sing. I didn’t even know that was going on, and afterwards I thought it would be good for me to do the same, if only to get an unbiased opinion. ESSENCE.com: What were you expecting to come from YouTube? FIELDS: All I was expecting was to record videos, and get real honest opinions from people who didn’t care anything about me. Never did I think people would start reaching out to me and start requesting videos and songs. ESSENCE.com: You got even more than that… FIELDS: Within a year I had 25 videos up, received over a million views, 300,000 subscribers, and had people reaching out to me. One of which was Jermaine Dupri, who messaged me on YouTube. But, when I didn’t respond, he found me on MySpace,  and that’s how we finally made the connection. ESSENCE.com: How shocked were you? FIELDS: (Laughs) At first I didn’t even think it was him. His message was, “This is Jermaine Dupri, I saw your videos on YouTube and I’m trying to get in touch with you.” All I’m thinking was, don’t play with me! I ignored him for a while, but he was very persistent and kept writing me. So I started to think, “Maybe this is him.” Eventually he flew me, my mother — who is also my manager — out to meet him, and it wasn’t like I got signed right away. ESSENCE.com: Eventually you did though, and what was your reaction? FIELDS: It was surreal, it took a while to register. I had never heard of anyone at that time getting signed that way. ESSENCE.com: It really is an amazing story. Who have you met that has given you some sound advice? FIELDS: Janet Jackson and I had a really casual conversation in which she said that she really believed in me, and is a real supporter. ESSENCE.com: Nice. Janet is team Dondria. What other artists have inspired you the most? FIELDS: Whitney Houston, Aretha Franklin and Etta James have had the most influence. ESSENCE.com: But who do you end up getting compared to, and how do you feel about the comparisons? FIELDS: When people hear my music, I often hear them asking, “Did Monica make a new song?” I even hear that our looks are similar. I don’t have a problem because I know I’m a new artist so there is going to be comparisons, and I don’t mind if ultimately it’ll cause people to listen. However, later on I would want it to stop. ESSENCE.com: When I hear your single, “You’re the One for Me,” I am impressed by the quality of your vocals and how truly R&B, not pop, the record is. Will the album match the single? FIELDS: Yes, JD and I wanted to make sure the album had real singing. On this album we found my sound, we found my niche, and this isn’t a trendy album, this is real R&B — nothing altered. ESSENCE.com: Why are you Dondria now, if you were called Phatfffat before? FIELDS: It was nickname I got from a college roommate because of how much I ate right before I sang. Although I still will answer to it, I was thinking long-term and becoming a rising icon. [The name] Phatfffat was a no-no, Dondria made a better artist name. ESSENCE.com: Your album however, is called “Dondria vs. Phatfffat,” explain the concept. FIELDS: The album’s out August 3, it touches on every emotion, and something that everyone can relate to. It explains the difference between the silly girl the world met on the computer to the artist who is now showing she can do more than sing before a webcam.