By Rachaell Davis · Updated October 23, 2020
Three of the most prominent young women in music this year delivered show-stopping performances at Power 105.1’s annual Powerhouse concert in New Jersey. Sponsored in part by AMP ENERGY Organics, the event drew a packed crowd to the Prudential Center in downtown Newark and saw a who’s who of the Hip Hop & R&B artists who dominated the music charts this year hit the stage to bring October to a close. SZA brought all the Black Girl Magic to the stage as she ran through just a few of the many popular cuts from her platinum-selling debut album CTRL, including “The Weekend” and “Love Galore.” She also gave the crowd a snippet of her Black Panther soundtrack tune, “All The Stars” featuring her TDE labelmate, Kendrick Lamar. The R&B vibe continued as Interscope starlet Ella Mai made her way to the stage with a set that included her latest single, “Trippin,” as well as her record-breaking summer anthem, “Boo’d Up.” She also took a moment to delve into a few fan-favorites like “She Don’t” and “Anymore” from her previous projects. The performance came as Ella’s self-titled debut album officially went gold on October 23, selling over 500,000 copies in less than 2 weeks since its’ release. 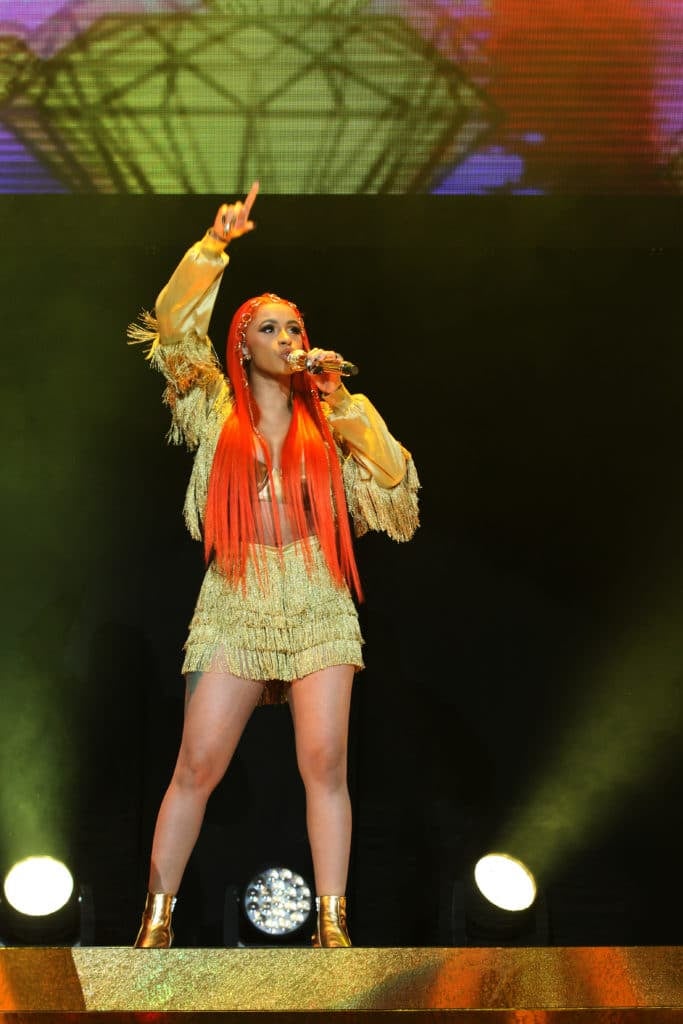 Headliner Cardi B closed things out as only she can, with a performance that included a host of back up dancers, guest appearances and several songs from her platinum-selling debut album, Invasion of Privacy. Outfitted in a gold tasseled skirt, matching jacket and sleek orange hair accentuated with gold jewels, the new mother of 1 had the audience singing along as she ran through a host of her hits including “Money Bag,” “Ring,” “Bartier Cardi,” “I Like It,” and of course, “Bodak Yellow,” among others. The set also featured a performance of her brand new single, “Money,” and saw the breakout rap star joined on stage by SZA for a quick performance of “I Do,” and later joined by fellow NY rapper, Pardison Fontaine, for a performance of their new single, “Backin It Up.” AMP ENERGY Organics also partnered with Power 105’s Angela Yee to shine a light on 6 of the areas most unique and hard-working entrepreneurs who are aiming to change the food, fashion, beauty, art and music game for the better. Among the 6 recipients were rising singer James Audrey, visual artist and entrepreneur Jasmine Howard, barber and entrepreneur Gizmoe, caterer and entrepreneur Monique Mark,  and entrepreneurs Katie Garcia + Garrett Sheskey, who each got the chance to showcase their hustle at Powerhouse NYC. Additional performers on the lineup included Lil Uzi Vert, A-Boogie and Lil DuVal, among many others.