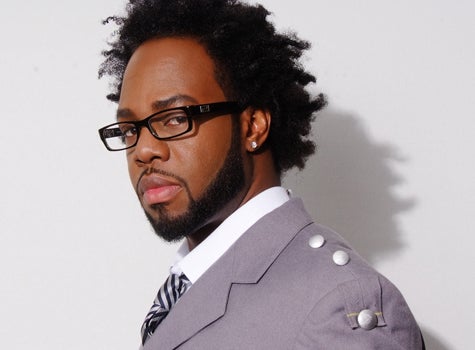 Dwele might fly below the mainstream radar, but he’s your favorite rapper’s favorite singer. Born Andwele Gardner, the Detroit native collaborated with Kanye West on “Flashing Lights” and is currently featured on the Chicago MC’s newest single “Power.” Dwele released his own sixth album “W.ants W.orld W.oman” yesterday, which he described as a work in three parts. From writing to composing, the sensitive crooner does it all, counting the piano, bass, drums and trumpet in his repetoire. Featuring collaborations with Raheem DeVaughn, DJ Quik, Slum Village, David Banner and new songstress Monica Blaire, this LP boasts Dwele’s highest number of guest appearances since his 2003 major label debut, “Subject.” ESSENCE.com caught up with Dwele just before a show in San Francisco, where he chatted about “W.ants W.orld W.oman,” why he takes so long between albums, and who he’s dating. ESSENCE.com: Tell us, what is your album “W.ants W.orld W.omen” about? DWELE: The album is broken up into three sections. The first revolves around my alter-ego, and is where I can do things that I don’t usually do, like be cocky. The second part is not really just about my hometown of Detroit but really the world and the economy. I’ve been sitting on these songs for awhile, the oldest is five years old, but it’s hard to throw a political song between two love songs. The last section is feel-good baby-making music, so I’m covering all of the bases. ESSENCE.com: Tell us about your first single, “What’s Not To Love.” Is that from the cocky section? DWELE: No, it’s not about me. That song’s from the “W.omen” section of the album and it’s a collaboration that I did with singer Mike City. It’s just about me asking a woman to look inside herself and see why she’s so lovely. ESSENCE.com: We marked the anniversary of the death of Michael Jackson last week and you reprised the late singer’s “Human Nature” in 2009. How’d that happen? DWELE: That was just somehting that I did the night of his death. I heard the news and went home and recorded it as a tribute. I almost didn’t release it online because there were a few flubs, but I let some people listen to it and they liked it so I put it out. “Human Nature” has the most hits on my website to this day and I almost didn’t do it. ESSENCE.com: You’re touring right now. Where are your next dates, and is your brother still playing horns with you? DWELE: Man, I’m going everywhere! The only place I’m not going is Omaha and I want to know why not! We already started touring and passed through New York and Baltimore. I’m in San Francisco right now, I’ve got Atlanta tomorrow, then Memphis, Nashville, then back to the West Coast. ESSENCE.com: Since you have such a live show following and play so many different instruments, will you ever release a live album? DWELE: I might, I played around with that idea for this album. This was the first time I recorded with a full live band. It’s usually all me, but I brought in all these other musicians to see how it feels, and so far the response has been great. So maybe for the next album, I’ll do a live one. ESSENCE.com: You take quite a bit of time off between records, why? DWELE: I swear it doesn’t feel like that. When my manager says, ‘We have to put out an album,’ and it’s been like two years, it honestly doesn’t feel like that because I stay on the road. I’m going to try to be better. ESSENCE.com: Describe the collaboration with Kanye West for his new single “Power”? DWELE: I flew to Hawaii for that song. I was actually in the last week of trying to finish my album and he called. But it was Kanye and I’d never been to Hawaii before, so I said ‘I’m going!’ We did a few concepts, and we worked on about four songs. ESSENCE.com: Will those four tracks make Kanye’s new album? Will he ever appear on one of your albums? DWELE: I have no idea about the four songs. As for him on my record, we’ve talked about it. That’s how we met originally, when we did the remix for my song “Hold On,” where Kanye did one of the coldest verses. The way he did it, you just have to listen. ESSENCE.com: Do you have any favorite songs from “W.ants W.orld W.omen”? DWELE: They’re all my babies, but how about I give you a favorite from each section? From the “W.ants” section, my favorite is the song I did with Raheem DeVaughn called “Dim the Lights.” From the “W.orld” section, I love “The Hangover.” And from the “W.omen” section, it’s “I Understand.” ESSENCE.com: Why is “I Understand” a favorite? DWELE: I just like the feel of that joint. When I made the music, I wanted to make a song that people could make love to. But once I started writing to the music, lyrically it went away from being sexual and became more like “I’m here for you.” When I played it after I’d finished, I didn’t want it to sound that way but since the song went that way naturally, I kept it. ESSENCE.com: Is there anyone to whom you’ve dedicated that song, anyone you’re dating? DWELE: Well, I’m not in a relationship but there is someone that if she heard me say that, she might be mad.