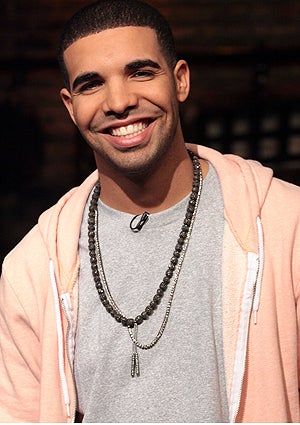 In case you didn’t know, Drake isn’t your average rapper. Maybe it’s because Drake, born Aubrey Graham, is Canadian bred, and Canadians — well, they’re just different. Or maybe it’s due to the fact that Drake, 23, began his career playing the role of Jimmy Brooks on the hit high school drama series “Degrassi: The Next Generation.” Perhaps it’s the way Drake can spit a mean 16-bars on the mic, and then seamlessly switch it up and sing his own hooks and melodies, sans Autotune. We think what sets Drake apart from the pack of today’s young male rappers is that he is not afraid to step out of the box. With his major label debut album “Thank Me Later” out today, Drake proves, like Sinatra, he did it his way. One after another, his singles — “Best I Ever Had,” “Successful” with Trey Songz, “Every Girl,” and “Find Your Love” — have reached the top of the charts, making Drake the first rapper to ever have his first two singles hit the top ten in the same week. In addition, Drake has accomplished the unthinkable: his 2009 mixtape “So Far Gone” has managed to sell more copies than many major label artists’ full-length albums, and heading into 2010, the song “Best I Ever Had” was nominated for two Grammy awards without Drake actually having an album released. In what seemed like a matter of minutes, Drake went from being virtually unknown to the rapper most likely to succeed, which led to one of the biggest major label bidding wars in hip-hop history. Whether or not Drake’s music is your cup of tea, it would be foolish not to respect his independent hustle and strong work ethic. We think more people should take a few pages from Drake’s lyrical blueprint for success, and apply these tips to their daily grind. “Two thumbs up, Ebert and Roeper/I really can’t see the end getting any closer/ But I probably still be the man when everything is over.” – “Over” Confidence Real confidence doesn’t rely on what you have or don’t have, it lies in who you are. Confidence draws success, not the other way around. If you want something you have to act as if it is already yours, and it will come. “Look at what I done/Look at where I’m is/It’s only just begun/Cause I was stayin’ home/When they was havin’ fun/So please don’t be surprised when they announce that I won.” — “Winner” Determination Do not stop until you win. While dreamers continue to dream, it’s the believers who take action. Usually the only thing that holds most back from success is fear. So stop asking asking “why,” and start asking “why not.” Winning is a product of being unafraid. “A lot of y’all are still soundin’ like last year/The game needs change and I’m the ma’f-cking cashier.” — “Successful” Creativity Look at new opportunities as an opportunity for change. When pursuing your goals, your attempts to “do it big” will most likely require doing what hasn’t been done. “Yeah I tried to tell ’em future, let ’em know/Send da hatas all my love X and O/I got a black box where suggestions go.” — “Congratulations” Focus When climbing to the top there will always be those who try to pull you back down. Instead of letting this discourage you, use it as the fuel to keep you motivated. Listen to those who support you, but also pay attention to the comments of your adversaries — what you learn might propel you even further. “It may not mean nothing to y’all/understand nothing was done for me/so I don’t plan on stopping at all/I want this sh-t forever, man” — “Forever” Persistence When striving for longevity, understand you have to put in the work. When the rest of the world slows down, that’s when you should increase your drive. True persistence won’t let you stop, even if you might want to. “Thank Me Later” is in stores and available for download today.