Tracking his every move via Snapchat, we waited anxiously while the preeminent, DJ Khaled made his way to the ESSENCE office… our large conference room was jam-packed with a bevy of our staff editors (still on the clock, with laptops in tow), ready to hear those famous one-liners, up close and in-person!

While our work deadlines still needed to be met, we anxiously awaited Khaled’s arrival… and then… finally, we heard his theme song, “I Got The Keys,” being played from a staffer’s desk, as he floated down the hallway! It was definitely a major moment for us, as Khaled has been in the spotlight for most of this year; having produced one of the hottest albums of the summer and recently hosting the VMA’s!

As Khaled sat down to talk to us, he revealed a major key… that someone he’s always looked up to -and admired- Mr. Sean Combs (aka P. Diddy, Puff Daddy), has tapped him to be the new face of CÎROC Mango! An honor that Khaled was happy to accept; he even brought samples to the office for us to taste! Of the collaboration, Khaled also received ‘keys’ to the city of Miami Beach this past weekend during Combs’ Revolt Music Conference, and he released a short film titled “Let’s Get It,” in order to help inspire the next generation of tastemakers. 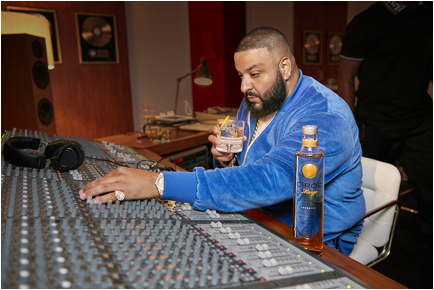 Khaled says, “I feel blessed that Sean picked me to share my story…it wasn’t easy to get here but I never gave up. A major key is to recognize wins, both big and small. I am proof the struggle is worth it.”

In addition to working with Combs, Khaled also revealed that he has a book in the works (coming out in November), and that he has his own Champs shoe store, because of his huge sneaker collection… he even warned that his fiancé often tosses some of his old shoes, because there’s just… so many! Lol…

Take a look at our exclusive one-on-one interview with Khaled here, and learn how you too, can get the keys to success… we want you to have a pool as big as Kanye!