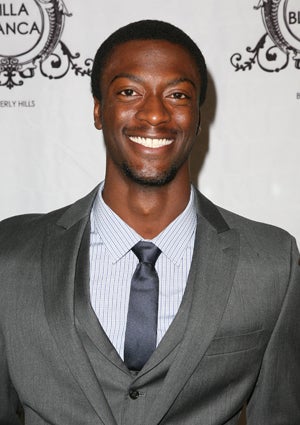 You may not recognize the name Aldis Hodge, but we’re sure you’ll remember his face. The New Jersey-cum-Los Angeles native has a resume a mile long, boasting roles on everything from “The Game” to “CSI,” and now he’s jumping into the third season TNT’s “Leverage,” which premieres this Sunday at 9pm eastern, as super geek Alec Hardison. ESSENCE.com spoke with Aldis as he drove around Southern California in his Prius and chatted about his key to success, playing a computer whiz and beginning his career as an ESSENCE magazine model.   ESSENCE.com: We heard you began your entertainment career as an ESSENCE model? ALDIS HODGE: I was a little three-year-old kid and my older brother of two years Edwin Hodge went to do a job and they needed an extra kid. My mom asked me if I wanted to do it, at first I didn’t want to but then I remembered that she’d given me a Batman toy after a job, so I decided to get my Batman hustle up and start working. I actually remember the ESSENCE shoot and it was a good time, I felt like we were important because we were actually in a magazine!   ESSENCE.com: Season three of TNT’s “Leverage” premieres this Sunday, tell us about your computer nerd character Alec Hardison? ALDIS HODGE: It’s funny because a lot of people think that I can do what he does… which couldn’t be further from the truth. I’ve been able to explore my own creativity through this character, by building him into what I want with imagination. I feel like I’m hitting the playground every day with this job because I love the character and it’s been a collaboration with John Rogers, the show’s co-creator. In the beginning, Alec wasn’t supposed to be so outspoken but I’ve got a loud mouth and I improv and they let me. It’s a great working relationship that’s going on four years now.     ESSENCE.com: You’ve got a robust acting resume from “Private Practice” to “NYPD Blue,” you were even a voice in “Happy Feet!” How have you maintained such a strong career? ALDIS HODGE: I’ll tell you how, it’s called being broke and not wanting to go back! It’s always a struggle and a fight because this business can be so aggravating, a lot of great actors don’t see the light of day. I’ve been fortunate along with my brother Edwin, who’s actually going to be in the remake of “Red Dawn” coming up, to build a reputation. Sometimes the work speaks to our credit, sometimes the reputation speaks to our credit, but people have been generous enough to give us the opportunity. Sometimes you have to fight for the opportunity. Even with “Leverage” I had to kick in the door because truth be told it wasn’t my job. Someone else was being considered and John Rogers went to bat for me and said ‘I think you really need to see Aldis’ and they agreed. Then when they did see me, they chose me but I credit that to a lot of God, a lot of talent and a lot of luck. I always credit my mom because she gave me my talent and I think if you do good work, it speaks for itself.     ESSENCE.com: How did your mother begin as you and your brother Edwin’s manager and agent? ALDIS HODGE: At one time, I remember we were staying with my grandmother in New Jersey with 12 people in one house, my brother and I had to sleep in the attic. Of the 12 people, there were eight children so it was a mad house. But my mom made the decision to get us away from that. She was still working when my brother said he was going to act. She was trying to work and support his career at the same time without help from my father. She eventually decided to be our first everything, from an agent to a manager, but she was never a stage mom. She made sure we had a childhood and an education first. If you weren’t bring A’s and B’s home, you weren’t going to that audition. We really had to earn it because after awhile we understood that acting was something we truly wanted to do. Still, things were rough but mom never let us know. Even if she wasn’t eating, we always had a meal.     ESSENCE.com: Are you in a relationship, Mr. Hodge? ALDIS HODGE: I am single, very single. No children, I’m still a child myself! Kids are definitely something I’m looking forward to in my 30s, having a couple juniors and doing my old man thing. But right now, I’m a young buck chasing money, when I have kids I want the money to chase me.