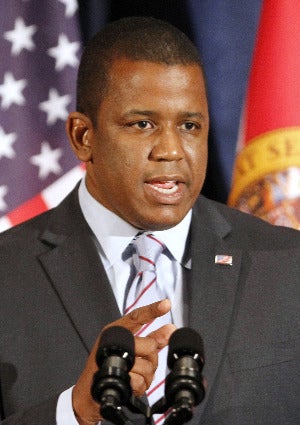 Kendrick Meek has a record for defying expectations. In the August primary, the Florida Representative running for U.S. Senate trounced his competitor (billionaire real estate developer Jeff Greene, whose campaign far outspent Meek’s) to win the Democratic nomination. Now Meek, a former highway patrol officer, faces Republican Marc Rubio and Independent Charlie Crist in a three-way race. He’s currently polling in third place. Yet Congressman Meek argues that we shouldn’t count him out. Here he explains why he’s not worried, his record on the issues, and why he’s the best man for the job. ESSENCE.com: Currently you’re behind Marc Rubio and Charlie Crist. How are you feeling about your odds of beating them? REPRESENTATIVE KENDRICK MEEK: I feel good. I feel that this race is going to be like the primaries. We were ten points down three weeks out, and people came out and voted for me — not by a little bit, but by a lot. They never gave up, and we’re not going to give up either. I feel, in the final analysis, we will prevail. ESSENCE.com: New provisions from the health care law went into effect this month, but many Democratic candidates have downplayed their role in passing it. In your campaign, conversely, you’ve emphasized being a “true Democrat” — are you satisfied with the health care bill that was passed? MEEK: I’m not running away from the health care vote. I’m not running away from any vote that I’ve taken. I think the healthcare bill has given everyday people rights that they did not have, especially in the district that I represent now. It takes discrimination out of health care. There are insurance companies that are mad because now they have to do things they didn’t have to do before. They’re trying to blame the healthcare bill for raising their rates — and I can’t help but think, “What was the excuse over the past six years that you’ve gone up on health care costs?” So, my vote on health care is part of working on behalf of the people in this country, and I look forward to continuing that effort as we move through the process. ESSENCE.com: The number one issue in this race is jobs — in Florida it’s higher than the national average at 11.6%, and even higher for African-Americans. What role have you played in the House with regard to creating jobs, and what you would bring to the Senate? MEEK: I’ve worked hard to diversify our economy, to create a new energy economy that will get us back to the days when people used to graduate from high school and college, and it wasn’t a question of whether they would have a job — it was a question of which offer they were going to take because there were so many opportunities. For us to find some light at the end of the tunnel on job creation, it’s going to take a forward-leaning approach toward developing jobs here in this country instead of shipping them overseas. I believe we’ll see a better year in 2011 than we’ve seen in 2010. The stimulus act was part of stopping us from falling further into a depression, and I believe everybody can agree with that. But as the investments from the stimulus are made whole, with private sector investments, it will allow us to do a better job in the future. ESSENCE.com: You were the first American politician to land in Haiti after the earthquake in January, and you’ve also championed legislation to help Haitian refugees. How will you carry these priorities to the Senate? MEEK: I think staying committed to Haiti’s development is very important for our economy and for Haiti’s economy. We’ve made a commitment to stand up on behalf of a country that has fought with us for our own independence. The trade preferences that I helped usher through Congress created U.S. jobs and also helped build a textiles economy in Haiti that’s in competition with Taiwan and China. I will continue to push forward in our commitment as a country to Haiti, especially in the aftermath of one of the most horrific national disasters in the history of the country. ESSENCE.com: Simply, why do you think you’re the best candidate for the job? MEEK: I can bring perspective to issues that everyday Americans are facing. I will always be a fighter for the middle class. I will make sure that we expand job opportunities. I’m against privatization of Social Security. I’m against offshore oil drilling off the coast of Florida. I’m for new energy and green opportunities that will create white-collar and blue-collar jobs. I will continue to fight for a woman’s right to choose what happens with her body. And I will continue to work very hard on behalf of Florida and on behalf of this country. For more of Cynthia Gordy‘s Obama Watch stories, click here.