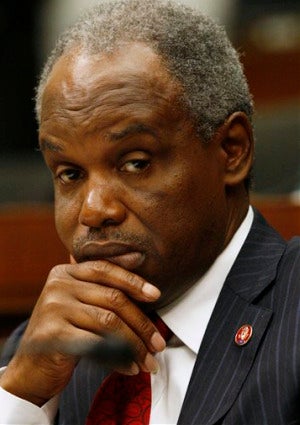 You can add Georgia Representative David Scott to the list of lawmakers who have received threatening, vitriol-filled letters and calls since Congress passed health care reform last week. For Scott, however, the alarming display is nothing new–he made headlines last summer when a swastika was spraypainted on the sign outside his district office, and since then he has continually received hateful correspondence. As Congress breaks for its spring recess and members return to their home districts, ESSENCE.com talked to the African-American Congressman about the racial undercurrent behind the upheaval, the security situation, and why he is intent on fighting back. ESSENCE.com: It’s been quite a week for Congress. How are you doing? REPRESENTATIVE DAVID SCOTT: We’ve been going through a bit of a battle, but we saw a great victory of getting healthcare reform passed. We did not allow anything to intimidate us. We kept going, and we go some great things for the American people. ESSENCE.com: You’ve been a target for intimidation all along, before any legislation passed. Some of this must have rattled you somewhat. SCOTT: I pray every day, and I ask God to keep His arms of protection around me. I trust in the Lord, so none of that worried me. I’ve gotten death threats, the swastika, mail that says things like, “David Scott, you’re nothing but a ni**er,” and “None of your colored constituents are going to be able to save you because we don’t want this socialized Obamacare you’re pushing because you Negroes are too lazy to take care of yourselves.” That shows you where we are and what the fear is. There is so much racism underneath all this. ESSENCE.com: Many Tea Party protestors will tell you, though, that there is no racial undercurrent. They say it’s about ideological disagreements over this law. SCOTT: A lot of this is not about healthcare–a lot of people don’t want to see this African-American President succeed. I just told you the racial slurs and language in what’s been coming. We’ve got to expose this and not allow them to rule the day. This is not America. America was magnificently characterized in November of 2008 when we elected, for the first time, an African-American President of the United States. ESSENCE.com: When you go to your district for the Congressional recess, will you be changing protocol for handling events with your constituents? SCOTT: I will be going on with district meetings, I’ll be in churches giving messages on Sundays, and meeting my people everywhere. I will be going forward in my regular business of meeting with my constituents. We have talked to law enforcement about the threats that have come down. The Secret Service has been investigating and is well aware. The Capitol Police are also doing a magnificent job coordinating with Homeland Security. Quite naturally, we’ll watch and be careful. We have security and will do everything we can to make sure that we are protected and our families are protected. ESSENCE.com: In all your years as a Congressman, have you ever seen anything like this before? SCOTT: I haven’t seen anything like this since the Civil Rights days. When we–John Lewis, myself and other members of the Congressional Black Caucus–walked last Sunday from the Capitol over to our office building, and we had to go through that crowd of tea baggers, I had never experienced anything like that since I was in a student demonstration in Alabama. It was so vile and hateful. When they saw us as a group approaching, they started booing just from the look of us as Black Congressmen. (laughs) Boooo! ESSENCE.com: You’re laughing, but how do you really feel about that? SCOTT: It makes me feel like we must be doing something. We’re going a great thing. As I told my fellow colleagues that day: We are intended for some great purpose, to vote for this healthcare bill. It’s just like the Civil Rights Act–that caused similar upheavals, to the point of 41 states wanting to their Attorney Generals to disavow it in their states. We haven’t had this kind of reaction since the Civil Rights Movement, because somehow what people see as opposition is colored with the racial situation. That’s why you’ve got to fight back and crush it. You can’t let it win. Read more: