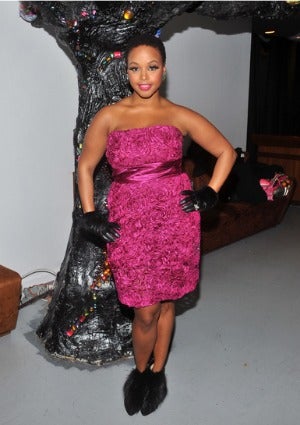 Chrisette Michelle is celebrating her girl power. In 2010 the Grammy-winning songstress chopped off her sleek locks to go au naturel and started rocking her now signature fire engine red lip color. On her latest album, “Let Freedom Reign,” Michele unleashes her newfound voice with her brand of politically tinged yet sexy R&B. The Renaissance woman spoke with ESSENCE.com about doing what she likes, and letting her “freedom reign.” ESSENCE.com: We’re sensing a little bit of rebellion in your look, in your new music. What’s new? CHRISETTE MICHELE: I’m feeling free. This is album is really true. There’s nothing that I’m saying that’s a lie. ESSENCE.com: And what brought this on? MICHELE: Disappointment, and being over being upset. You get so tired of being upset that you’re like, ‘you know what, I’m not gonna stay upset because I’m gonna do what I feel like doing.’ At the end of the day, if I do what I don’t feel like doing then I’m gonna be disappointed. So I might as well be disappointed doing what I like to do. I found out that doing what I want to do makes me feel free, and I really like that better than anything. ESSENCE.com: How does your newfound freedom translate in your new album, “Let Freedom Reign”? MICHELE: I wrote nine of the 12 songs on this album and I didn’t hold back any of my lyrics. Some people are going to be upset with me for making a song like “Let Freedom Reign.” But I didn’t do it so that people could be upset or agree with me, I did it because it’s what I felt like saying, and you’re definitely going to know that when you listen to the words. ESSENCE.com: And how would you describe the album? MICHELE: This album is when an artist decides that she wants to experiment. The first song that I played for [Def Jam chairman] L.A. Reid, for instance, the first line goes, ‘If there were no record deals. If I was saying something that wasn’t popular and nobody else wanted to sing with me would I still sing?” And my answer to that song is, “Let Freedom Reign.” ESSENCE.com: You were also the executive producer on this album. MICHELE: Yes, and that’s a lot for a brown-skinned girl, for anybody really. When you’re in a place where everybody is saying, ‘You should try this, you should try that’ to executive produce means you decide on your sound. [laughs] Maybe I got to executive produce because the album is so weird that people didn’t want to take the rap for it. But I think that [co-producer] Chuck Harmony and I really are really passionate about this album. ESSENCE.com: You feature Rick Ross, Black Thought and Talib Kweli on the album. It’s safe to say you love hip-hop. MICHELE: I love hip-hop. I grew a new disdain for it recently but I love hip-hop culture, I love the words in hip-hop. I love the reason for hip-hop. And for me, hip-hop is about being a street politician and finding a creative way to say what’s going on in your community. And it used to be that people were listening to the words of hip-hop and taking notes about what was going on in our community. I’m not positive about what it’s saying right now, but “Let Freedom Reign,” especially the title, is about me taking hip-hop where I think it belongs. ESSENCE.com: You’ve taken on a little political edge on this album. Why did you choose to take it there? MICHELE: Because I’m tired of being angry. We spend so much time being angry at America, being angry with politicians, when a lot of the power to move and change the world is in our hands. I have a line in a song that goes, ‘Keep us in the four walls of our church and we’ll be quiet.’ You can lock us up in the church and we’ll praise dance all day and nothing will happen. The government won’t change and we still won’t vote. So I’m ready to take America by its reigns, by the ropes that might have hung us, and let those be the ropes that pull us through. I’m gonna celebrate being free. Chrisette Michelle’ third album, “Let Freedom Reign” is out now. What’s your favorite Chrisette Michele song?