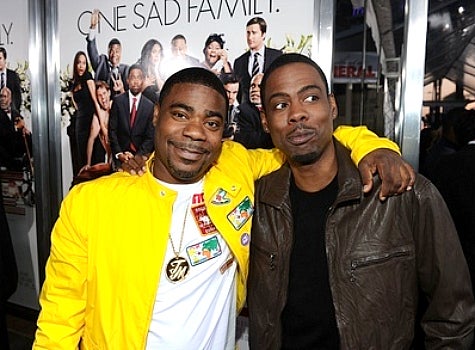 Following the 2007 British film “Death at a Funeral,” Chris Rock, Martin Lawrence and Tracy Morgan star in the remake featuring an all-star cast, including Loretta Devine, Zoe Saldana, Danny Glover and Columbus Short. The film revolves around Aaron, played by Chris Rock, who is the younger responsible brother of prodigal son, Ryan, played by Martin Lawrence. As Aaron organizes his father’s funeral, the homegrown hijinks ensue and skeletons fly out of the closet. Chris Rock and “30 Rock” Emmy Award-winner Tracy Morgan sat down with ESSENCE.com to chat about British humor, female comics and acceptance.  ESSENCE.com: How is this version of “Death at a Funeral” different than the original British version?   CHRIS ROCK: The British are more mannered and polite about their comedy. This is an American movie for an American audience. Tracy and I have worked for mass audiences for over a decade, so I think this movie is for everyone. Plus, anything with Tracy Morgan would be different, if you did “Malcom X” with Tracy Morgan, it’d be different.  TRACY MORGAN: Me and Chris are like A Tribe Called Quest. I’m the abstract, the funky diabetic! ROCK: The movie is a Timbaland remix, with a lot more blunts and it’s over the top in places. It’s a funkier version.  ESSENCE.com: In the film, Chris Rock plays Aaron, the responsible son who is organizing his father’s funeral, but Tracy, how would you describe your character, Norman?   MORGAN: Norman is the paranoid family friend, with a trace of schizophrenia. He’s crazy but a good dude at heart, a loveable loser.  ESSENCE.com: Speaking of family friends, we heard the set itself became something of a comedian’s reunion.    ROCK: It was fun seeing all these other comedians while we were filming. When you’re starting out, you see people all the time, but as you get older, people have kids and you never seem them. So on this movie, I’m hanging out with Tracy, I’m hanging with Martin Lawrence, Tommy Davidson and Will Smith came by the set, it was a great ride.    ESSENCE.com: Any particularly funny moments on set?  ROCK: I just love Tracy and Danny Glover on the toilet.  MORGAN: Danny Glover took Ex-Lax before I shot my scene and he pooped on my hand. When I first did that scene I was so subdued and Chris and Neil LaBute, the director, were like “You just got poop on your hand! You have to go crazy!”  ROCK: That really happened, I slipped an Ex-Lax in Danny’s lunch and he didn’t know that he took it.  ESSENCE.com: Tracy, while working with such seasoned actors and comedians, albeit in awkward circumstances, did you feel any pressure?     MORGAN: Being a part of this movie was like having all my big brothers around and there’s a fight in the park, I had to win! Chris and Martin left the door open for me.  ESSENCE.com:  What do you gentlemen think of contemporary Black comedy and its direction?    ROCK: I wish the women would get involved. [Black comedy now] is a little cliche, it’s alot of safe stuff, that’s why this movie is so good. It’s not a lot of cliche. Tracy did this type of role before in “Cop Out,” my guy is like a character Steve Carrell would play, so we’re taking [comedy] somewhere else.  ESSENCE.com: Following last year’s controversial documentary “Good Hair,” do you have any new projects on the way Chris?    ROCK: I’m prepping one that’s called “Credit is the Devil,” about Black people and credit. I know it doesn’t sound funny, but it’s going to be good.  ESSENCE.com: What would you like African-Americans to take away from “Death at a Funeral”?    ROCK: This movie is about accepting your family for who they are and not judging people. Aaron finds out his dad’s gay and he’s alright with it. This is a big movie for the African-American community, we need to get off this bashing gay people shit. We all have gay relatives, everyone’s got something. We need to be more inclusive, people should be able to be out of the closet, at least around their family. Read more: