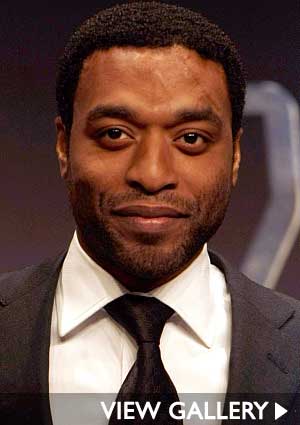 Chiwetel Ejiofor, 32, has been on a slow, steady grind since his debut in ‘Amistad.’ Almost 13 years later, and now costarring as a scientist in the world-is-ending epic ‘2012,’ the London native has an impressively versatile resume. Though he’s a man of few words–but ohhh, that accent!–we got him to open up about his choices, his career perceptions and what he’s learned about strutting in stilettos.

ESSENCE: You once said that you’d “over-shot” yourself with ‘Amistad.’ Do you still have those feelings?
CHIWETEL EJIOFOR: I was 19 and although I had some idea of what I wanted my career to be, it certainly didn’t include working with Steven Spielberg. That was an incredible ride. I still feel an excitement and an element of trepidation about getting a new project. It would be a shame to lose that.

ESSENCE: You’ve been a doctor turned cabbie (‘Dirty Pretty Things’), a drug dealer (‘American Gangster’) and even a drag queen (‘Kinky Boots’). Is there any part you won’t play?
EJIOFOR: As long as the story and characters are well-developed, I don’t think there’s any role I won’t play. I didn’t think about being a drag queen until I read the script for ‘Kinky Boots.’ That character was one of the best I’ve ever come across and suddenly I thought, Oh, I want to play this drag queen.

ESSENCE: You did quite well, but walking in heels is hard, isn’t it?
EJIOFOR: [Laughs] Thank you…. And yes, it really is.