Chadwick Boseman is ready for the big leagues. After making a name for himself on shows like Lincoln Heights and Persons Unknown, the 30-year-old Howard University grad landed a role most actors merely dream about—bringing Jackie Robinson’s story to the big screen.

In 42, Boseman turns in a riveting performance as the hall of famer, best known for breaking the “color barrier” and becoming the first African-American player to integrate Major League Baseball. But there is more to Robinson’s legacy than home runs and stolen bases.

“He was a fighter,” Boseman revealed to ESSENCE.com, “and it was necessary to have someone with that fighting spirit to endure what he had to go through.”

In the film, Boseman humanizes the Brooklyn Dodger first baseman and adeptly captures the challenges and hatred Robinson faced during that tumultuous time. Instead of giving viewers a sanitized version of history meant to show Robinson at his best, Boseman masterfully depicts the emotional turmoil Robinson experienced. His mesmerizing performance impressed fellow 42 star, Harrison Ford. 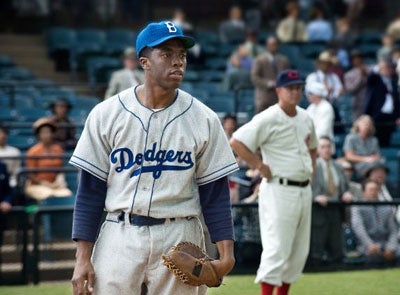 “I can’t tell you how much of a pleasure it was to have him as a partner in storytelling,” Ford told ESSENCE.com. “His commitment to the character and to the work was equal in the area of acting as what he put into the physical training. He was always there. And I mean there in a remarkably vulnerable way to the emotions of any scene. It was a treat, an absolute treat.”

Boseman, who also studied at the prestigious British American Drama Academy in Oxford, England, trained for months to prepare for the role, often sacrificing his body to properly emulate Robinson’s famed skills.

“The shoes were the worse thing,” he admitted. Boseman’s training regimen also included grueling five-hour workouts with a professional coach. “I ran through probably five or six pairs of shoes and my feet had bone bruises that I didn’t get over for several months.”

Despite the taxing physical demands, it was important for Boseman to expose audiences to the man behind the lore.

“I didn’t know how much of a legend he was before even breaking the color barrier,” Boseman acknowledged. “Even if he never would have done that, he would go down in history.”

To learn what made Robinson tick, Boseman spoke with Jackie’s widow, Rachel Robinson, who was heavily involved in the film.

“When you’re doing a character you want to know the full landscape. You want to know them spiritually, mentally and physically. So, I asked her were there any physical things that he did that stood out. We sat down for hours and talked about his personality and what his tendencies were,” he recalled of their meeting. “The way he stood, and the way he held his hands in the backfield…all of those physical things I tried to do.”

He added, “Getting this story out there is important because it helps us to grow as people.”